A look back at anger and a murky past

On this week's virtual ramble, Diary meets Prince Rupert and his sinister poodle, and finds yet another alley to duck into 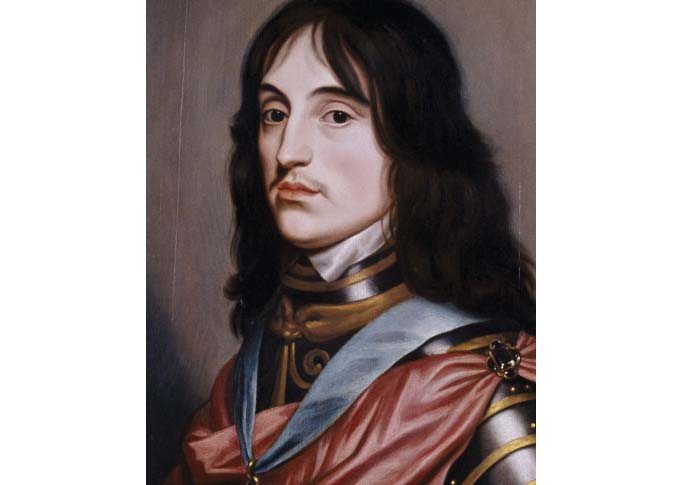 AND so from Coventry Street southwards, along Rupert Street, for this week’s stay-at-home, virtual tour of our borough.

It is named after Charles I’s nephew, the 17th-century sword-wielder Prince Rupert of the Rhine. He has rightly had a bad press over the centuries – he was an arrogant and angry fellow. For Diary, his reputation was irreversibly damaged by the portrayal of his character in the Ladybird Book of Oliver Cromwell, who Rupert clashed with during the English Civil War. He was a child soldier, first taking up arms aged just 14, and would grow up to be a giant of a man for the period, standing at 6ft 4ins in his socks.

He loved a dust-up and was known for being reckless – his cavalry charges during the Civil War steamed forward hoping bravery married to luck would overcome tactics and discipline. He took this approach to the high seas too – charging boats under his command to rush forward into both English and Dutch fleets that heavily outnumbered his. It is not surprising, therefore, he won no major battles in a long military career.

However, his reputation was such that the God-fearing Puritan ranks of the New Model Army believed Rupert was in league with the Devil, who manifested itself in his pet dog, a large white poodle called Boy. Cromwell’s propaganda machine played on his supposed devilry. Boy went everywhere with Rupert, and was finally killed at the Battle of Marston Moor in 1642. Parliamentary soldiers were convinced of the mutt’s dark powers, claiming the creature could sniff out hidden gold, catch bullets in his mouth, was impossible to kill, and had similar soothsaying abilities as Old Mother Shipton.

After the Civil War, Rupert fled abroad for a time but would eventually return – and it was in Restoration London he would fall for the Soho-haunting actress Peg Hughes. They didn’t marry, but had a daughter, the creepily named Ruperta. Being at Rupert’s side was a lucrative position, and the Prince funded his lover’s taste for jewels, gambling and general hedonism.

It would be terribly poor form while in the neighbourhood not to stop off at the fantastic Blue Posts pub, run by sister-and-brother team Zoe and Layo Paskin, they of The End club fame, who after building one of London’s best clubs set up two incredible restaurants – The Barbary, in Covent Garden, and The Palomar, which is in Rupert Street. If you are lucky enough to visit this Israeli fusion joint, check out the chef who plays his pots and pans with a wooden spoon as he serves up tasty morsels. The siblings saw the historic Blue Posts was up for grabs, right next door to Palomar, so they bought it.

There has been a pub on site since around 1739, and as was discussed previously in this column when we visited The Crown and Two Chairmen further north in Soho, the Blue Posts name is said to be linked with the sedan chair trade. A set of blue posts signalled a sedan chair “taxi” rank, a place you could hitch a ride home.

The distinctive building, dating from the early Georgian period, has upper floors that are built out over an entrance into Rupert Court, an alley with a chequered history.

As regular readers will know, Diary loves to duck into an alley, so let us pause our perambulations down Rupert Street and see what this court holds.

It is here the words of the poem London Lickpenny, written in the 1400s, spring to mind – namely if you’ve got cash, London can be very judicious, and without it, you’re stuck:

To London once my steps were bent
Where truth in no wise should be faint
To Westminster-ward I forthwith went
To a man of law to make complaint
I said: “For Mary’s love, that holy saint,
Pity the poor that would proceed.”
But for lack of money I could not speed.

For it was money and the law that kept a certain trade running in Rupert Court for many a year.

While today thoroughly respectable, it was once known for its brothels and “exotic” clubs – and many were said to have been run by the famous Messina brothers, the Maltese gang made up of five siblings who created a chain of brothels in London in the 1930s.

They had been expelled from Egypt for running a similar racket in Alexandria, and set about making the Soho game their own.

When they arrived in England in the 1930s, they decided they needed to ditch their Maltese monikers – and they chose titles that today feel like the characters from an early edition of Minder.

Brother Carmelo took on Charles Maitland, Eugenio became Edward Marshal, Alfredo lost the “o” to be Alfred Martin, Salvatore swapped his charming Mediterranean tag for the more staid Arthur Evans, while Atillio did the same, christening himself Raymond Maynard. They bought property across the West End, including in Rupert Court, and after the war began trafficking women from Europe to work for them.

The police were at best not interested, and at worst complicit: they seem to have been persuaded to always be looking in the other direction as brown envelopes and services were offered. Things eventually got too hot for the boys in the 1950s, after a series of exposes by The People newspaper’s crime reporter Duncan Webb, and they left the country before collars could be felt.

There were plenty of others waiting to step in – which leads us on to Bernie Silver. For a good 20 years, he was lead man in The Syndicate, a racket that ran Soho’s strip clubs from the Messina days through to the 1970s. His stock included sleazy stage shows in Rupert Court, and he was to get a six-year stretch after it was found he rented out rooms above his clubs to women for immoral purposes, sent down for the crime of living off their earnings.

Briefly, let us stop on the corner of Rupert Court, where the steak house Garners once sat: a favourite diner of The Beatles, there is a famous pic taken on the Fab Four walking down the alley, about to tuck into.

And Rupert Street was well documented in stills: these days were captured in a set of photographs by Wolfgang Suschitzky, best known as the director of photography on films such as Get Carter, Entertaining Mr Sloane and the Oscar-bagging The Bespoke Overcoat.

And on that down-at-heel note, Diary bids you farewell for another week. Stay safe, stay well.