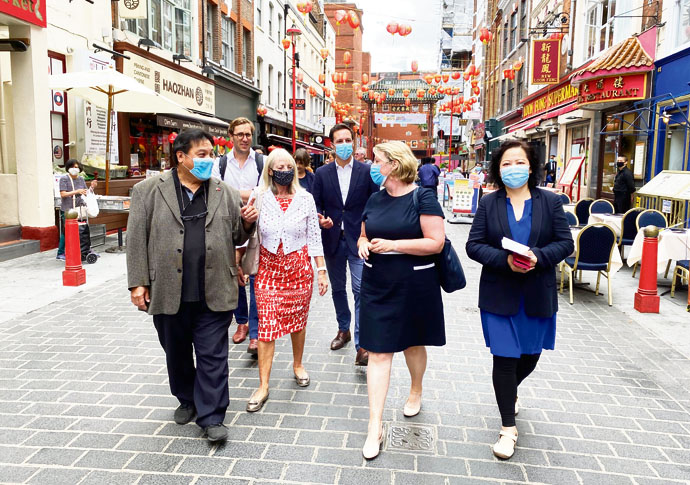 The Chinese Information and Advice Centre (CIAC) has raised concerns with the Met Police about a rise in petty theft and hate crimes since the new outdoor seating regime was introduced. Handbags have been stolen and some customers have been spat at.

Chinatown has been one of the areas worst affected by the financial impact of the pandemic.

The CIAC said it had been encouraged by the campaign to temporarily pedestrianise large parts of Soho but said it should not be the role of staff to protect outdoor diners from crime.

CIAC chairman Edmond Yeo said: “We are ­liai­sing with the police to express our concerns for the need of increased police visibility to ensure the safety of the staff and customers.”

It comes after Cities of London and Westminster MP Nickie Aiken visited Soho on Friday for the first time since the lockdown began and praised the success of the outdoor seating areas in Gerrard Street and Soho. Ms Aiken said: “I do hope consideration will be given to extending this arrangement as it brings places like Chinatown and Soho to life.” 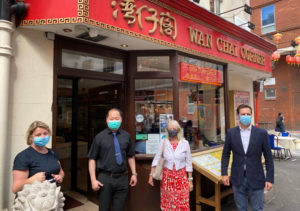 She added: “We all need to play our part and visit Chinatown to eat and shop. With the Eat Out To Help Out scheme coming to an end I would encourage Westminster residents to continue to support Chinatown and our other local neighbourhoods.”

She was accompanied on the walking tour by ward councillors Tim Mitchell, Louise Hyams and Mark Shearer.

Footfall in London’s West End has fallen by two-thirds since the coronavirus crisis with a lack of tourists visiting and people preferring to shop and eat close to home.

He said: “Until we have an operational vaccine in place social distancing will have to continue to protect people’s health, and with employers planning to continue home working well into next year, the numbers of people visiting the West End will be reduced for many months ahead.”

One in 10 Londoners are employed in the area and it is estimated that without a boost in consumer confidence in the near future job losses could be in the tens of thousands.

The New West End Company, which represents 600 businesses across Oxford Street, Bond Street, Regent Street and Mayfair has said without office workers and overseas visitors central London is in a “precarious” position.

Jace Tyrrell, NWEC chief executive, has urged the government to extend the business rates holiday for another year, claiming some businesses in the West End “are paying more in rates than in rent”. Mr Tyrrell has also called on the mayor to offer free travel into the city centre.