That’s the warning from dozens of Soho Society members following a survey about the return of Westminster Council’s al fresco outdoor dining project next month.

One in three members of the influential group – many are long-term residents – say they are “planning to leave Soho” because of the impact of the divisive scheme.

On April 12 the council will close dozens of roads around the West End so pubs and restaurants can beat Covid-19 restrictions and serve customers outdoors.

The project was supposed to bring a relaxed continental-style summer feel to the West End and help struggling businesses. But residents say they found themselves fighting through drunken anti-social behaviour, parties going on late into the night, and increased street urination and defecation because of lack of toilets.

The council said they intend to consult on whether to make the changes an annual event after this summer’s trial is over.

The Soho Society said this week in a statement: “The longer-term issues about the future of Soho if this scheme is made permanent, as is now on the cards, are arguably more concerning for the community as a whole. We asked for a two-year moratorium from September 2021 for Soho to recover and the issue to be tested at a local election in 2022. The council refused point blank.” 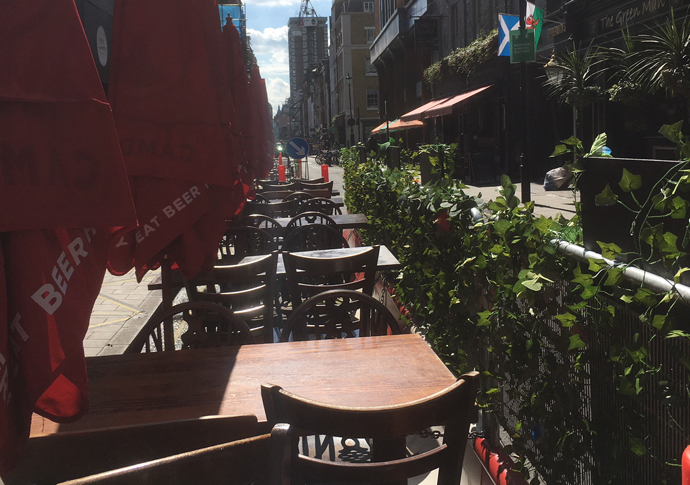 Its survey results found that more than half of at least 112 members did not trust the council to protect the interests of residents.

For many, it was the council’s failure to properly police the scheme that had left them wanting to leave their homes.

One survey comment said “it was impossible to get in and out of the street without fighting through intoxicated crowds every evening” while another protested, “a drunken-throng urinating is not anyone’s idea of what Soho should be like”.

One response warned of al fresco “defecating in the streets”.

Not all the responses were critical of the project, however, with some members saying that the council was giving “a fighting chance for recovery” to struggling businesses, and that the society was biased.

One said: “Soho has been as it is with visitors, drinkers, parties, for hundreds of years and has always been the heart of London’s nightlife. It’s not a rural village.

“Noises and crowds are to be expected and have always been integral to Soho’s charm.

“Perhaps those who think Soho should be quieter should move to a restful, more accessible area and leave Soho as it has always been.

“Soho is dying and this will give it some life again; Soho must evolve to survive and al fresco is part of that evolution.”

Council leader Rachel Robathan has written to Soho Society chair, Tim Lord, saying a “formal consultation” on whether to make “al fresco” a permanent fixture in the Soho calendar will start around May, adding: “I hope that you and Soho residents are reassured that these current, planned measures are temporary, as well as by my clear commitment that any future schemes will be developed with input from the local community.”

This year the street dining will be seven days a week and go on until 11pm.