Retired nurse Betty, 97, dies from Covid after a lifetime spent caring for others

Covid infection thought to have come during 'routine' hospital visit 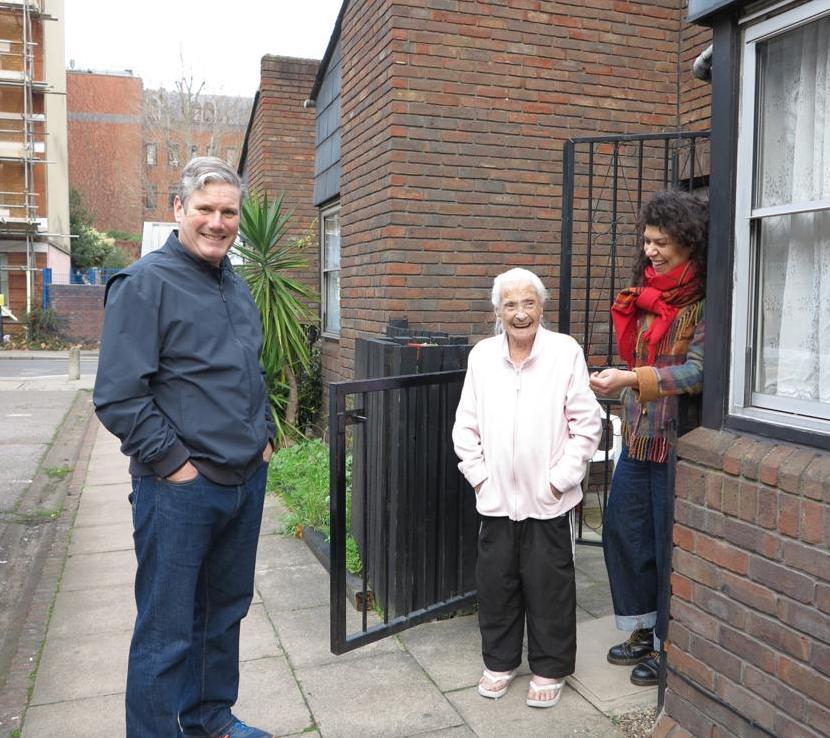 Rebecca Pine, known as Betty, gets a visit from Holborn and St Pancras Sir Keir Starmer earlier in the pandemic

A 97-year-old former Great Or­mond Street Hospital nurse has died from Covid-19 after a suspected infection caught in hospital.

Rebecca Pine, known by friends as Betty, had lived in Brooke’s Court in Baldwins Gardens, Holborn, for decades.

She died on December 28 just before a new vaccination programme was stepped up by the government.

Her daughter, Carole Hanson, said she had been told her mother caught the virus during “a routine visit” for cancer treatment before Christmas.

Ms Hanson said: “I don’t blame the hospitals for what happened. The spread of infection is a very difficult thing for them to manage. It’s such a crazy virus. But I have been told she caught it at the hospital so of course it’s something they should be looking at.

“On the death certificate, Number 1 is Covid. Number 2 it lists all the physical things that were wrong with her – COPD, dodgy kidneys, things like that.”

In the first priority group, Betty had been due to receive a first dose of the Covid vaccine before falling ill.

Ms Hanson had rushed to London from Arizona in the United States, where she has lived most of her adult life, but sadly arriving a day too late to see her mother before she died. She said: “I did talk to her on the phone on Christmas Day – I wished her a happy Christmas and that was the last time I talked to her.”

Hospital acquired infections (HAIs) remain of serious concern to health chiefs who are tasked with stopping the spread of the virus while also reassuring non-Covid patients it is safe to come in for emergency appointments and surgery.

Hospitals in north London have been completely overhauled to try to create safe “pathways” for non-Covid patients.

The main University College Hospital building is moving towards a “Covid only” set-up – with urgent appointments, like cancer treatment, being carried out in other hospital buildings. To combat the problem, health chiefs are setting up “virtual wards” where patients with milder forms of Covid can stay at home with “oximeters” that monitor their own blood oxygen levels.

Recalling growing up in a council flat in Gower Street, Ms Hanson, now 70, said: “My main childhood stomping ground was the British Museum. It was literally around the corner – I think I’ve been in that building more times than anywhere else. Mum loved taking us there, and to the theatres and cinema.”

She added: “She had that very typical British sense of humour, with a biting wit. She didn’t have a degree, but was very educated. “She was a very good artist, but never used it – one of those wasted talents. She could draw like a crazy person.”

Ms Hanson wanted to thank a neighbour called Richard Rhodes who had selflessly helped her mother in her final years and particularly during the lockdown. “

He has done things he didn’t have to do, and that the average person wouldn’t want to do. He’s bought her an upmarket walker out of his own pocket,” said Ms Hanson.

Betty had also been helped by the Holborn Community Association, which featured her in a film about its work during the lockdown and an appeal for donations.

Holborn councillor Julian Fulbrook said: “Betty was an absolute stalwart of the Holborn Labour Party. Although she had a problem, with cancer, over many years she kept going for an amazing length of time.”

He recalled how she had been an “absolute tower of strength” in supporting the opening of the Holborn Mosque despite opposition on her estate, adding. “She will long be remembered for her principled fight to keep this facility open in the face of hostile prejudice,” he added.

Former neighbour Awale Olad, also a Labour ward councillor, added: “She stood up to some vile and racist people who came out of the woodwork when the mosque’s application was submitted. She didn’t mince words. Her humour extended to a large poster she had on her window, that read ‘it’s a lovely day, watch some bastard spoil it!’”

A UCLH spokesperson said: “We were very saddened by the death of Rebecca Pine and our thoughts are with her family. Safety is our number one priority and we have always followed national guidelines for infection prevention and control and the management of Covid-19 throughout the pandemic.

“As it can take up to 14 days for symptoms to show, it is difficult to accurately say where someone caught the virus and whether this was pre or post-admission to hospital.”

NOT JUST A STATISTIC

EVERY day, we are now given a grim figure of how many people are in hospital or have died from Covid-19.

At the New Journal, we have resolved not to see these numbers purely as graphs and statistics – they represent real people, some of them are neighbours. That’s why throughout this awful pandemic we have tried to write about the lives of as many as possible.

We know some families will want to remain private but for others our coverage is a chance to celebrate the people we have lost. Too many loved ones are already gone, and without proper send-offs due to the restrictions on service gatherings.

If you would like us to write about a relative or a friend who has died from Covid, please contact the reporters by emailing editorial@camdennew journal.co.uk or call 020 7419 9000.