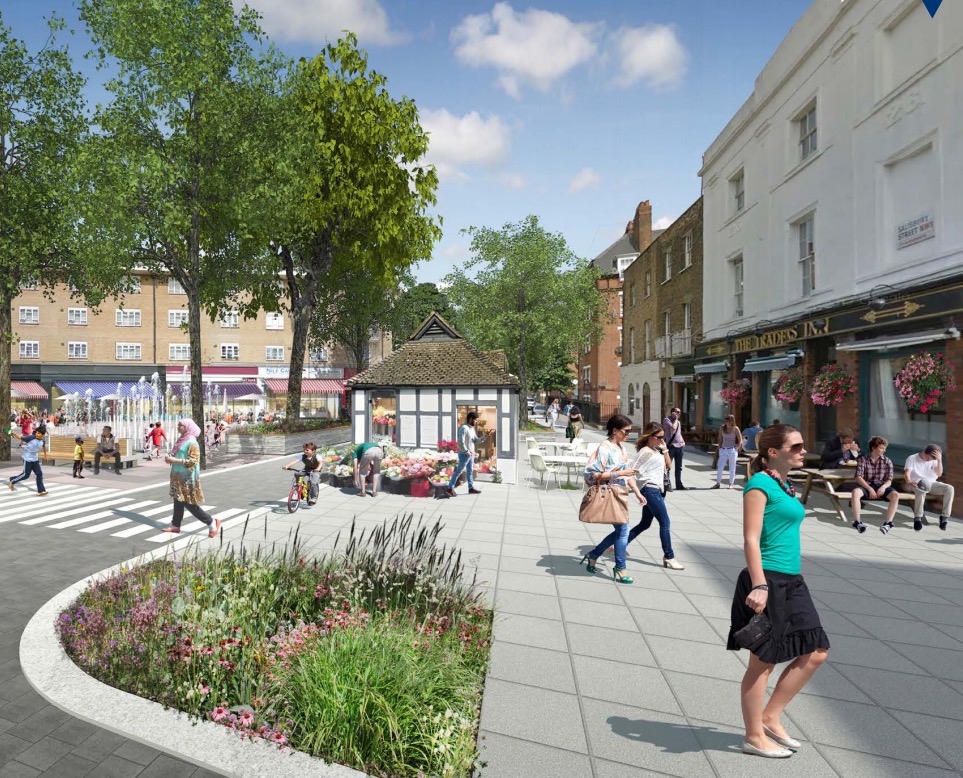 How the new Church Street could look

Bold new plans for a 15-year regeneration of the Church Street area, including nearly 2,000 new homes, have been unveiled by the Town Hall.

But a resident’s group has raised “grave concerns” about the perceived lack of public consultation.

The area is one of the most deprived in Westminster, and with the council owning around 80 per cent of the land, it has long been considered ripe for regeneration.

Around 1,750 new homes will be built and a new health centre and a community hub will be created.

Church Street itself will be made into a pedestrian priority street, with the road raised to pavement level to created a promenade.

The plans would see an improved street market with around 220 stalls and 150 van parking spaces, with back to back trading along the centre of the street. The market may temporarily need to be moved to Salisbury Street while work is carried out.

According to Westminster Council’s masterplan, one of the aims is to “bring much-needed evening vitality with new restaurants, bars and cultural venues, and the market’s trading hours could possibly be extended.”

There are plans to create a new cultural quarter centred around the antiques market and the Cockpit Theatre, and the council predicts 3,500 construction-related jobs and 525 retail jobs will be created..

The amount of green space in the area will also be boosted, with the creation of a “green spine” through the middle of the area.

The new health centre is to be built in Lisson Grove and will be directly connected along Church Street to a new community hub, which will offer a new library, childcare and training facilities and services.

Work on Church Street and the green spine would start in the next few years, though work on Jordans House and Little Church Street would not begin until at least 2030.

The Church Street Ward Neighbourhood Forum are currently analysing the proposals in details, but raised concerns with the Westminster Extra.

Forum spokesman Achim von Malotki said the group was “very disappointed” that there had been “almost no residents or stakeholder involvement”.

“It is a typical top-down planning approach which denies the earlier promise of commitment to inclusive involvement with the local community,” he said.

“The council has announced a so-called ‘public consultation period’ but we note that this is meant to commence today after an apparently exhaustive, and undoubtedly expensive, process while the masterplan has been thoroughly researched and fully developed.

“We feel that input from local people would have contributed greater value to the project and the process would have been more inclusive and respectful of the original work processes promised by the council.”

Public consultation runs until October 29 and more than 40 events showcasing the plans are taking place over the coming weeks.

Westminster’s cabinet member for housing, Cllr Rachael Robatham, said: “We are committed to regenerating the Church Street area and creating a great place in which residents and businesses will thrive. Because of this, we used planning specialists and architects to reappraise potential sites to present robust proposals which we know we can deliver.

“We want residents and businesses to help shape their neighbourhood and now is your opportunity to have your say.

“We genuinely want to understand the views of the local community collectively and site by site. We have a comprehensive consultation programme to ensure that we speak to as many people as possible and as part of this we will be in touch with the Church Street Ward Neighbourhood Forum to discuss the proposals and also their concerns.”

A series of public eng- agement events will take place at Westminster’s Regeneration Base, 99 Church Street, and at other sites.

The dates and locations of these events are adver- tised locally and online. The masterplan is available to view at: churchstreet-masterplan.org.uk