On this week's virtual ramble, Diary visits a street where booze, gambling and prostitution sparked a moral panic - a place PoWs could only dream of 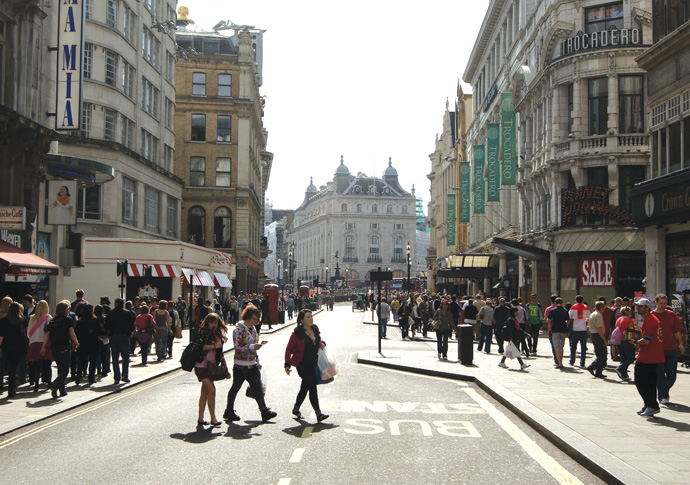 AND so from Great Windmill Street last week to Coventry Street. It’s the one with yellow cards on the Monopoly board and it is here that we resume our virtual walk.

Dating from the 1680s, it was built for commerce and entertainment, a raison d’être that has defined it in one form or another for centuries.

Its early life offered workshops and warehouses alongside booze, gambling and prostitution, and by the time the street had reached its 150th birthday its entrenched impolite behaviour was enough to set hands wringing at The Times. On March 24 1841 the editor criticised its “infamous brothels”, and called for police action.

The rozzers got on it, and so many women were nicked that a Westminster magistrate got fed up, stating “these women must be allowed to walk somewhere”.

According to reports, the area’s prostitutes celebrated by going on a spree of ringing Soho doorbells in the middle of the night and swearing at the sleepy inhabitants who answered. The Times got wind of this and responded the following week: “It is the duty of the police to see that [prostitutes] walk in such a manner so as not to annoy and insult peaceable persons and modest women, and that their ‘walking’ does not extend to the knockers and bell-handles of the householders.”

Its grubbiness brought down a rain of fire and brimstone in 1850 – a blaze tore through the tenements, factories, workshops and warehouses. Igniting in Mr Creese the Bootmakers, it quickly destroyed a tailors, a stationer and a hosier. Burning for 13 hours, other buildings home to three other boot-makers, a gunsmith, a poulterer and a carpet-maker were destroyed.

From the ashes came many of the buildings we know today – heading up to and beyond six storeys, they were faced in a white granite or Portland stone cut in classical proportions. Until the façades were altered by garish marketing – its Rialto cinema boasted the first ever neon-lit sign in the UK – it looked rather swish.

It was on the unfortunate fire-ravaged chicken seller’s plot that Charles Hirsch, a bookseller, set up shop in the 1880s. He advertised his speciality as French literature from his “Librarie Parisienne” – but alongside the Gallic tomes were dirty mags, including a range of gay publications. A friend to Oscar Wilde, he alleged the poet and playwright was a good customer of his.

Now for a spot of sustenance and to where the famed Scott’s seafood restaurant was located up to 1967. It started as an oyster warehouse, established in 1851 by fishmonger John Scott and now, based in Mayfair, is in the top five oldest remaining London eateries. It enjoyed a celebrated clientele throughout its long tenure.

It was here James Bond creator Ian Fleming liked a dry martini, shaken not stirred, and decided it should be 007’s bevvy of choice.

It is also mentioned in the movie The Great Escape: PoWs chat about how that’s where they are making a beeline for once they’ve dug the bally tunnel.

Alongside Scott’s growing reputation, the music halls and theatres gave way to nightclubs and cinemas. The Roaring Twenties saw it shimmer – Fred Astaire, Charlie Chaplin, Rudolph Valentino, Noel Coward and the Prince of Wales were bar proppers along the stretch. It also attracted its fair share of oddness, illustrated by the following story.

It was with a sense of some understatement that a clerk described the events that left him “feeling a bit dizzy” as he came round in a bed in Charing Cross Hospital one morning in 1922. He told doctors he was walking to his office job at 6am on April 16 in Coventry Street when a strange and semi-invisible shadow had leapt from the cover of a dark alley, made for his neck and sucked his blood till he fainted.

Doctors examined him and discovered he had been stabbed with what they described as a “thin tube” – and suddenly London had a vampire story to feast on.

Incredibly, the same day two other victims were admitted to the hospital, having been attacked in the same spot and in the same way.

Plod were at a loss, fuelling rumours that something was abroad. It was said detectives secretly contacted a vampire slayer, who hunted down the monster, rammed the devil with a stake through the heart, and buried the body in hallowed ground in Highgate Cemetery. Whatever the truth, no one was ever charged.

Such gossip would have been exchanged across the rumbustious dance floor of Coventry Street’s famous Cafe de Paris, opened by Martin Poulsen, a Danish-born waiter who had worked along the road at the Embassy Club, in 1924.

A friend of the Prince of Wales – His Maj would dine three times a week – Poulsen built a secret staircase leading from a balcony into nearby Rupert Street so such valued customers could come and go as they pleased without attracting attention when they were up to no good. It was also used to eject unruly guests lowering the tone.

Music was the thing, of course, and its reputation for world-class performers was helped by the excellence of a resident player during this time, the hefty, 24-stone strong American xylophonist Teddy Brown.

C de P also has tragedy ingrained: on March 8 1941, a German bomb smashed into the building and killed at least 34 people. Among the dead was Poulsen, and the beauti­fully talented Trinidadian saxophonist Baba Williams. The youngest daughter of former prime minister Stanley Baldwin was among the dozens who were seriously hurt. Waiters were seen washing the injured with champagne, as there was no running water to hand.

Let’s now pop into another basement music joint, The Flamingo. Found in the Mapleton Hotel, it was set up by pianist Jeffrey Kruger. His MO was a jazz club that did not revel in its seediness – somewhere one could feel respectable. It meant a strict tie-wearing rule, with Kruger stating: “It is possible and preferable, I think, to be hip and keep a high social standard.”

It is also where Dame Babs Windsor got her first break: as an 18-year-old Kruger employed her as a cabaret singer to replace his sister who was unwell. She stood on hallowed ground – Billie Holiday had headed straight to the Flamingo after her 1954 performance at the Royal Albert Hall. She sang for lucky punters all night – and on that musical note, toodle-oo for another week.