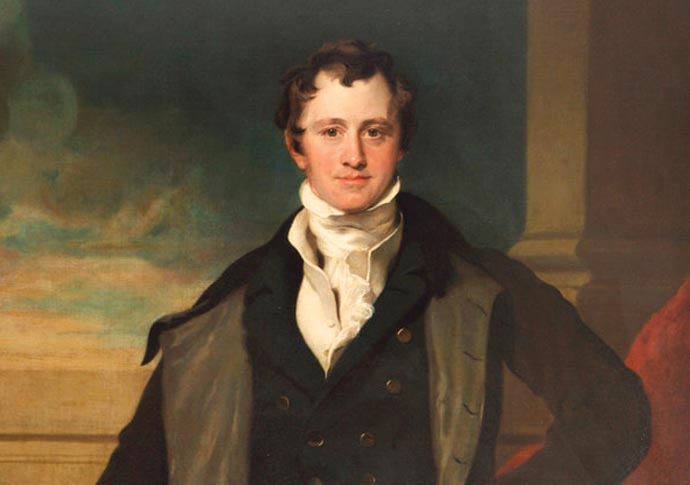 AH, Berkeley Square, where the possibility of hearing a nightingale sing is today drowned out by the revving of a supercar’s engine.

It was at this glorious Mayfair address we parted company last week on our virtual tour of Westminster, and we shall recommence our wanderings from the steps of No 44, a grand 18th-century mansion that is home to the Clermont Club, a thoroughly respectable place to be a member of.

But if we peer past the top hat sporting, livery-strutting doorman and in thorough the impressively panelled front door, we are looking at the scene of some rather unsavoury practices in times past.

In the 1950s this address was home to an underground card club, run by the eccentric John Aspinall. Remember, at this time you were forbidden to lay a bet anywhere but at a racecourse – so Aspinall found a steady stream of Mayfair-dwelling clientele who wanted to settle down with a good vintage, a gaggle of like-minded peers, and fritter some paper away.

Its membership roll was impressive – as well as lords, it was of the haunt of James Bond creator Ian Fleming and the billionaire businessman turned single-issue politician James Goldsmith.

But hidden behind Aspinall’s charm and grace, something dodgy was afoot. His card players were unaware that Aspinall was working with the notorious gangster Billy Hill – and had hit on a wheeze, imported from Marseilles crooks, to fleece those at the tables.

The con worked like this: a deck of cards was run thorough a hand-held mangle, which made miniscule alterations in the bend of each card.

Resealed in cellophane, the doctored packs would then be dealt out to an unsuspecting guest, while a plant would come in, read the cards, and win big.

The figures Hill and Aspinall took at 44 Berkeley Square were impressive: on their opening night, they scammed £14,000 – around £300,000 today. Their biggest score came in 1958, when they took more than £300,000 from the unfortunate Lord Derby, worth £7million now. Aspinall spent his money wisely, using large sums to finance a growing collection of elephants, gorillas and rhinos.

Now we move north-west a few streets to Upper Grosvenor Street and it is here we will discuss the ongoing attraction of Sir Humphry Davy.

Ah, Davy! A poet scientist, a polymath who straddled the Georgian and Victorian periods and whose talents helped revolutionise London and the world.

He lived at this address for 40 years, and it was from here he gadded about town, enjoying a vigorous intellectual life coupled with plenty of partying.

The son of a Cornish woodcarver, not only did he push, push and push again, against the limits of scientific knowledge, he did so with pizazz.

At the Royal Institution, he used theatrics to bring alive a topic on the chemistry of manure, and made crop yields, tanning and dying sexy themes for discussion. Fiddling about in his laboratory could produce unexpected results: in 1799, he took a deep gulp of nitrous oxide, giggled a lot and decided to call it laughing gas. He recommended it to doctors as a handy anaesthetic – a suggestion they painfully ignored for some time.

His lectures drew huge audiences at the institute’s Piccadilly base, and he used them to highlight links between art and science, stating: “The perception of truth is almost as simple as feeling the perception of beauty; and the genius of Newton, of Shakespeare, of Michelangelo and of Handel are not very remote in character from each other. Imagination, as well as reason, is necessary to perfection in the philosophical mind. A rapidity of combination, a power of perceiving analogies and of comparing them by facts is the creative source of discovery. Discrimination and delicacy of sensation, so important in physical research, are other words for taste; and the love of the magnificent, the sublime, and the beautiful…”

Samuel Taylor Coleridge was so impressed by this eloquent scientist he told friends he went to hear Davy lecture to “renew my stock of metaphors”.

Davy’s impact lives on – and a mark of his reputation during his own time is that he was immortalised in Music Hall song. Charles Rice, 23, was an attendant at the British Museum during the day, and pub and inn crooner at night. In 1837 he kept a diary, noting how he kept an eye on the Elgin Marbles between nine and five, before knocking off to swan about West End boozers at night. One of his more popular songs recalled Davy’s place in the collected memory of Londoners a decade after he had died.

“What are mortals made of?,” sang Rice.

“By analyzation, I’ve tried all the nation;

defined each gradation, and proved every station;

And I’ve found out what mortals are made of!”

Now, before we scoot northwards, we find ourselves by Park Lane, and it is here where we can consider the story of Gregson the Pugilist.

Lord Elgin, who had pinched the Marbles that our bar stool lyricist Rice gazed upon while dreaming up his lyrics, had a house in Park Lane. It was here the priceless Greek antiquities, hacked from the walls of the Athenian Temple, lay while Elgin tried to chisel £76,000 in cash out of prime minister Spencer Perceval’s government. Elgin would finally be successful in 1816, but only after accepting around half that fee for his stolen goods.

Gregson had a sideline away from the ring. He would pose for groups of gentlemen artists who wished to sketch his magnificent form. Contemporaries described him as being “six feet two inches and all admired the beauty of his proportions,” and he had plenty of takers.

The sketchers, members of the Royal Academy, asked Gregson to take up a variety of classical Greek poses – the discus bloke, the muscle-flexing Apollo, the chap clasping a shield and javelin…

The life drawing session was a success, and it led to Gregson being invited to Lord Elgin’s Park Lane garden, where he was asked to repeat the whole process in the nod and in front of the Marbles so flesh could be compared to stone. Such was the success of this outing, the Academicians repeated it a fortnight later – but this time invited four more boxers along to sketch before enjoying bouts between the models.

And on that heady mix of physical prowess and sculptural beauty, we part company for another week.