Nothing came before an Arsenal match, even a book launch 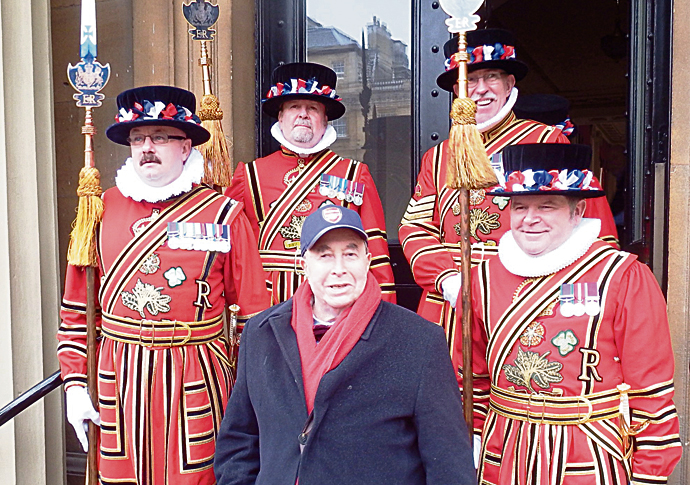 ERNEST Hecht, the doyen of independent publishers who combined a sharp business acumen with a big heart that embraced an endless stream of charitable causes, has died at 88.

Eccentric in attire he was also a fanatical Arsenal supporter – he rarely went anywhere without wearing his Arsenal baseball cap. But when it came to business he had an unparalleled knack of spotting best-sellers that had slipped by other publishers, and, as a result, his business based in Bloomsbury, opposite the British Museum, grew and grew.

Typically, when the New Journal sought permission to use an image by the great artist Ronald Searle of emaciated Japanese prisoners-of-war for a memorial in Mornington Crescent, Ernest lent his support to the project without a moment’s hesitation. He had published a large book with drawings by Searle while a captive in a Japanese camp.

He wouldn’t dream of a fee. It was his contribution to a cause he believed in.

As a Jewish child Ernest fled from the Nazis in Czechoslovakia, coming to Britain before the war in the famous Kinder-transport – humanitarian trains that carried more than 10,000 children to Britain. He was part of that group of outstanding publishers – George Weidenfeld, Victor Gollancz, Andre Deutsch – who had come here as refugees from Hitler.

Ernest started Souvenir Press in the early 1950s in his bedroom at his parents’ flat with a loan of £50. His first success was a paperback on Len Hutton, England’s opening batsman. His list of authors must have been the most eclectic of any publisher – ranging from Che Guevara, tap-dancer Fred Astaire, the black civil rights campaigner and actor-singer Paul Robeson, to an endless array of lifestyle books as well as tomes on pets.

It was Ernest alone who spotted the potential of Jenny Joseph’s Warning, When I am an Old Woman I Shall Wear Purple. He just had the gift of being able to sniff what the public couldn’t get elsewhere. Ernest was never a joiner of clubs or trade associations. The Garrick Club never interested him. He turned his nose up at joining the Publishers’ Association. He was always his own man.

When I first met him several years ago outside his office in Great Russell Street he took me to his favourite coffee shop around the corner where he regaled me with tales of deals he had made and lost, revealing that he could be a tough negotiator, and through it shone his love of literature and admiration of certain critics whom he seemed to hold in awe. He was an Arsenal season ticket holder for more than 60 years and nothing could come between him and a Gunners match – even a book launch. Ernest also became a Brazil fan and boasted he had seen them win five World Cup finals. Unsurprisingly, he became a literary agent for Pele.

Publishing books and making money just filled one part of his life – but he always felt the need to help those in need. He founded the Ernest Hecht Charitable Foundation and one of many public charity events was a series of concerts at the National Gallery in honour of the great pianist Myra Hess, who performed morale-boosting recitals during the Blitz. He was awarded the OBE two years ago. Ernest was never married and had no children but Souvenir Press will carry on, his close friend Barb Jungr, an artist, stated this week.

The funeral next week will be a private affair but a public “celebration” of Ernest’s life will be held in the near future. “I am so touched by the flood of tributes and messages that have come into the office about all the kindnesses Ernest did for people,” Barb said. “He brought such joy to people. He will be missed so much.”