Food for thought: Take a dekko at the Art Deco 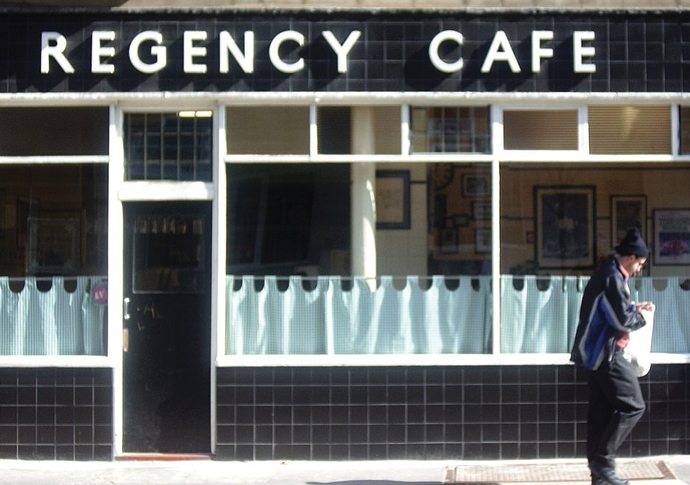 Enjoy a great breakfast at the Regency Cafe

“LYING in bed,” wrote the writer/philosopher GK Chesterton, “would be an altogether perfect and supreme experience if only one had a coloured pencil long enough to draw on the ceiling.”

As Diary does not yet possess such a wondrous thing, let us shake a leg, don our late-winter weather gear and step out for another instalment of our virtual tour round this magical borough of historical delights.

We parted last week by Lambeth Bridge, so let us turn heel up Horseferry Road and chuck a right into Dean Bradley Street to gaze at the Robert Hooke Science Centre, which is part of Westminster School.

As we are celebrating our city, it would be bad form not to consider the man the centre is named after. Hooke – called London’s Leonardo – was one of those fascinating polymaths, a jack of all trades and master of them, too.

Astronomer, scientist, mathematician and architect, his work changed the face of the metropolis.

After the Great Fire, he was appointed the Surveyor to the City of London, teaming up with Sir Christopher Wren.

Hooke’s role in landmarks including St Paul’s and the Royal Observatory is often overlooked – Wren has stuck in the public mind – but his fingerprints linger over so much. He worked on The Monument, which was built not just to mark the start of the fire, but, typically Hookeian, as a place to mount a telescope: he included a basement laboratory.

It was Hooke who suggested giving London a grid-type pattern with glorious avenues and squares, but saw his dream scuppered by property owners who wanted to keep their land and perhaps steal a few yards from neighbours in the chaos. Hooke had the unenviable job of acting as a mediator in disputes – new streets ate into people’s yards, while adjoining walls were a source of bitter arguments. He earned a reputation not only as a first-class scientist but a wonderfully calm and balanced settler of disputes. He also cared deeply for the plight of those fire-forced refugees squatting in Lincoln’s Inn Fields and Covent Garden, insisting authorities cracked on at superfast speed with rebuilding.

Sadly, it appears there are no contemporary images of the great man to be found, and this leads us on to a little mystery.

He was a founding member of the Royal Society, so it is unthinkable that no portrait was created.

We know artist Mary Beale painted an image she called Portrait of a Mathematician – and it matches the descriptions of Hooke.

Hooke had fallen out with Sir Isaac Newton, as professional rivalry got in the way. They argued over the properties of light (as you do). Beale’s portrait included a model of the Solar System – and it was said to have incensed Newton, who felt Hooke was somehow claiming ownership of astronomical research (he wasn’t). When Newton was appointed head of the society, and was overseeing a move from its headquarters, the painting was simply left behind.

The Beale work reappeared in the 1960s and was sold – rather hilariously, as a picture of Sir Isaac. It then reared its head at Sotheby’s in 2006. A deep-pocketed private collector won the bidding war and it is again hidden from public view. The mystery, if this is indeed Hooke, remains.

Now let’s meander past the old Horseferry Road Magistrates’ Court, an imposing 1960s building that in Diary’s eyes represents everything horrible about cheap Modernism: it wasn’t even functional, with a reputation for its mechanics breaking down. Beaks hardly raised a brow if they heard a suspect was late because they were stuck in a lift.

It was the scene of the case of Lord Justice Richards, who was accused of flashing on a commuter train. He was acquitted, after showing the court a pair of Calvin Kleins to illustrate the unreliability of witnesses. This was, he said, his preferred style of underwear, and not the kegs described by the accuser.

Nearby, we can see the former headquarters of the Gas Light and Coke Company, which first illuminated London streets in the 1800s. They built an HQ on the site of a market garden owned by a chap called Bower.

On Christmas Day 1814 they turned on the taps from Horseferry Road and Westminster was lit up, marking a key moment towards modernity.

All this jibber-jabber is making Diary peckish – so let us rest our wearies at the famous Regency Cafe, in Regency Street.

This celebrated diner was opened in 1946 by Antonio Perotti and Gino Schiavetta, Italian émigrés who had worked in numerous cafés and restaurants before banding together.

The Regency serves the grandest and best-value breakfasts in town. It is famous for its homemade steak pie, which has fuelled generations of diners, and its interior – the original Art Deco tiles survive. It means it is regularly used for film and photography shoots. As well as lovely tea and a cracking atmosphere, it has a selling point Diary enjoys: the many, many pictures of Tottenham Hotspur players that grace the walls.

Gino and Antonio were committed fans, and that has been inherited by the current owners. Tottenham’s Anglo-Italian star of the double-winning period, Tony Marchi would bring such team mates as Jimmy Greaves and Danny Blanchflower in for a stamina-building plate of chops. For those of us (Diary included) of the Spurs sect, we sit on hallowed chairs.

And on that more cheerful note, until next week. Stay well, stay safe.