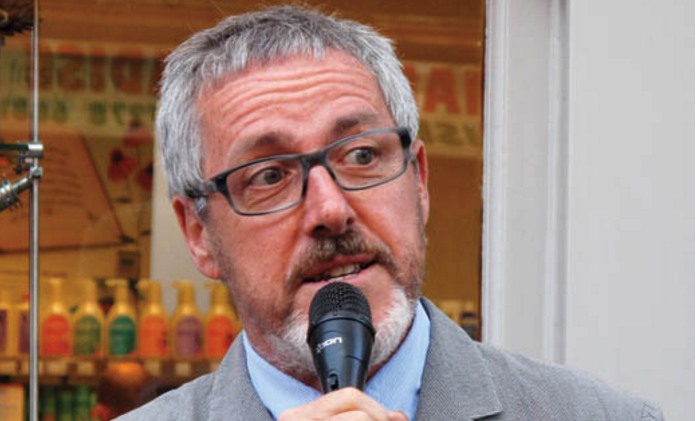 The television funnyman, in a long letter to his neighbourhood publication Fitzrovia News, warned that the Mayor of London Sadiq Khan wanted to “move the noxious poison away from Oxford Street and out into the back streets”.

He said it would be better to leave the pollution where shoppers are rather than “where children go to school” and “babies sleep”.

He said: “Walk along Oxford Street and count the number of heavy diesel engines pumping their particulate matter into the immediate atmosphere. Buses and taxis stopping and starting, idling and accelerating. Empty or not, they chug, fume and sputter ceaselessly.

“Delivery lorries throb out their fumes endlessly. Mr Mayor and his TfL team rightly want to dispose of this evil and save the temporary inconvenience to shoppers.

“They intend to move the noxious poison away from Oxford Street and out into the back streets: along Mortimer Street and up Great Portland Street through the inhabited area.

“They seem to want to put this stuff where people live and babies sleep, where children go to school and people work all day, where we cycle and walk – where we eat. I don’t follow this. If you have shit in your garden, would you move it into your living room?”

He added: “I hesitate to go into print. I hesitate to be a Nimby (though I have always believed that if we don’t care for our own backyard then nobody else is likely to) but the desire to pedestrianise Oxford Street will have more repercussions than allowing the shopper to romp and yomp along the ancient thoroughfare un-menaced by extremely slow-moving traffic.”

The council had supported the Mayor in its pedestrianisation plan until ruling Conservatives realised the scheme was politically toxic, shortly before the local elections in May. It then backed out of the plan but has recently announced it will be drawing up its own plans to modernise the famous shopping district.

Mr Jones said the plan to pedestrianise was the council trying to “fight back” against big shopping centres like Westfield and Stratford.

He added: “Many have loudly, and publicly, lamented this ‘decline of the High Street’. But what is a Canute-like policy to ‘maintain growth’ at all costs? We still grow all right, just not in the way that backward-looking planners and councils want.”