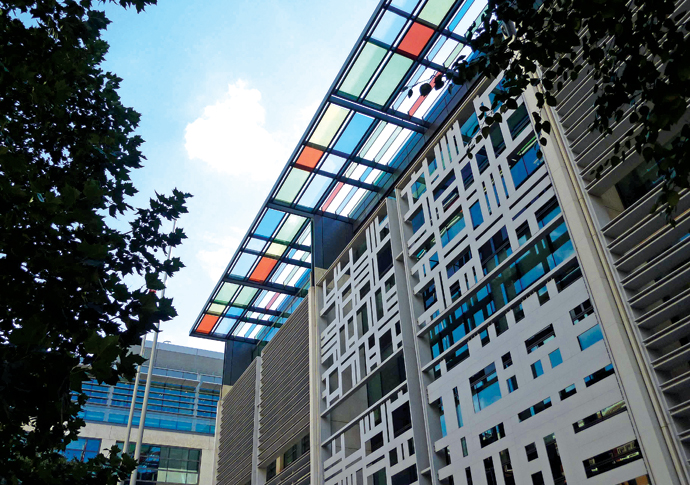 WE parted company last week in Smith Square, enjoying the glory of the church / music hall called St John’s and giggling at Queen Anne’s input that saw the construction of the four corner towers.

Now we embark on another stretch of our virtual lockdown tour of Westminster, and we start our journey by heading north to Marsham Street, home to the Home Office.

The current building dates from 2005 and was designed by post-Modernist architect Sir Terry Farrell.

It provides an interesting example of the changing whims of architectural tastes. The blocks Sir Terry’s designs replaced were three towers by Eric Bedford, chief architect to the government for public buildings, in the 1960s.

They in turn had replaced defunct gas holders, which had been decommissioned in the 1940s and converted into huge bomb shelters.

They were designed to withstand a direct hit by a 500lb bomb and beneath the gas holders were war rooms for critical civil service staff – beginning Whitehall’s long association with Marsham Street.

The gas cylinders were owned by Westminster Gas Light and Coke Company, who we considered two weeks ago.

While this company’s mark on lighting up London cannot be overstated, let us pause for a moment and remember the people who worked for the firm during the Second World War.

The thousands of merchant seamen who gave their lives during the six-year conflict contained a good many from the WGLCC: they brought in vital fuel for the war industry, and lost many in doing so. Of the long list of ships sunk, let us pay respects to the crew of SS Gasfire, a 2,972-ton collier that was launched in 1936.

In October 1940 a German E-boat torpedoed the boat off Great Yarmouth. The ship managed to struggle home, but she lost 11 of her crew. She was repaired, and went off to do her duty again. But she had no more luck – on June 21 1941 she struck a mine off Southwold and went down with those on board.

The gas holders came down by the end of the 1940s, and by 1960 work on the three ugly sisters began. It didn’t take long for them to be seen as examples of excessive British Brutalism, and were criticised for creating a nasty backdrop for Westminster Cathedral.

It was not always so: Bedford’s work was feted when they first opened (it took 10 years from the first spade in the ground to civil servants swishing in to the marble-clad entrance). The three towers, linked by corridors three storeys up, boasted express lifts and escalators, and stunning views from the 13 floors.

But its interior as well as its exterior quickly became unloved, with successive politicians complaining that it was a depressing place to run the Home Office from. This prompted their demolition.

Sir Terry’s designs are made up of three buildings and named after Elizabeth Fry, Mary Seacole and Robert Peel, figures chosen for their influence on Home Office policy.

Like their predecessor, they too were feted when they opened, partly for the fact they were no higher than the buildings around them, and also simply because they were not Marsham Towers. Yet as we have seen with even Sir Terry’s designs, which can be found across central London at places such as Charing Cross and the M16 building on the southern banks of the Thames, architectural criticism often grows as time whittles away the sheen of the new and trendy. How long till a generation arrives who decide such works are no longer fit for purpose?

Now we amble north a little and come to the Grey Coats Hospital, at the top end of Horseferry Road. Its founding was an inadvertent product of the Great Fire of London. After the disaster had left so many homeless, there was an exodus towards the old medieval areas of Westminster. People were pushed west, and among those desperate, homeless Londoners a fair few turned to crime to meet their daily needs. The fact criminals could seek sanctuary in West­minster Abbey is also said to have been a draw for those who had committed capital offences – and this was in an age when a long list of petty misdemeanours could see you swing.

And how to deal with this influx of new parishioners’ offspring kept church authorities busy.

The answer was found in 1698, when eight kind-hearted members of St Margaret’s Church each put 65p in a pot to found Grey Coats. The aim was to help build “loyal citizens, useful workers and solid Christians”.

A disused workhouse in Tothill Fields was bought and converted. Children were taken in to learn their lessons, given in an austere regime to build up their constitutions.

Queen Anne gave the place her blessing, and her Royal Arms still stand above the front door, next to casts of children decked out in the original Grey Coats uniform.

The benefits of the school may be numerous, but not all those enrolled felt so. In 1801 the pupils had had enough of the bossiness of their tutors, and went on a rebellion that saw them occupy the building and the school called on the militia to break the siege.

And it is peering in to the Grey Coats courtyard, imagining the pupils throwing their quills and ink from windows at their oppressors, where we will part company for another week.
Stay well, stay safe.