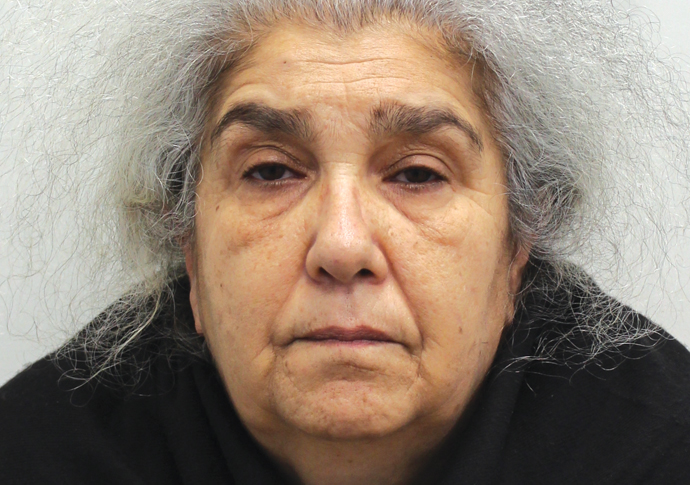 Lulu Lakatos – ‘This was an audacious theft’

A WOMAN who switched £4.2million of diamonds with pebbles without a Mayfair gem store realising has been jailed after she was extradited from France.

Lulu Lakatos, 60, was found guilty of conspiracy to steal at Southwark Crown Court on Wednesday.

The Met police said she was part of an international gang that targeted the Boodles store in New Bond Street.

Seven bagged-up gems were replaced with pebbles in front of store staff in March 2016.

Two men involved in this theft were convicted of conspiracy to steal. But two women, believed to be in possession of the precious stones, are still at large.

Flying squad detective William Man said: “This was an audacious theft, carried out in plain view of experienced and professional staff at a renowned jewellers. The meticulous planning and execution of this theft reveals to me that those involved were highly skilled criminals.”

He added: “While she played a key role in this theft, it is clear she did not work alone and enquiries remain ongoing to identify all those involved.”

The prosecutor had argued Lakatos was part of a gang and had been planning the raid for some time, contacting Boodles and posing as a wealthy Russian investor who was looking to purchase gems.

In the weeks leading up to the raid a gemologist named “Anna” working on behalf of the investor was due to meet staff at the famous store.

Lakatos met two men at a café before they “scoped out” the store together from the street, the Met said.

The next day she dressed up before arriving for the meeting where she was shown seven diamonds in an individual locked bag.

She put it in her own bag and then, after being challenged by the Boodles staff member, gave back a similar looking, but different, bag.

The switch was not noticed despite a search of her handbag. She left the shop and walked down the street where she gave the bag to two other women.

Lakatos changed her clothes in a pub toilet in Victoria before catching a Eurostar train back to France.

Boodles did not check the bag until the following day when it was discovered pebbles were inside.

Lakatos was identified and arrested in France and extradited back to the UK on December 3 2020.