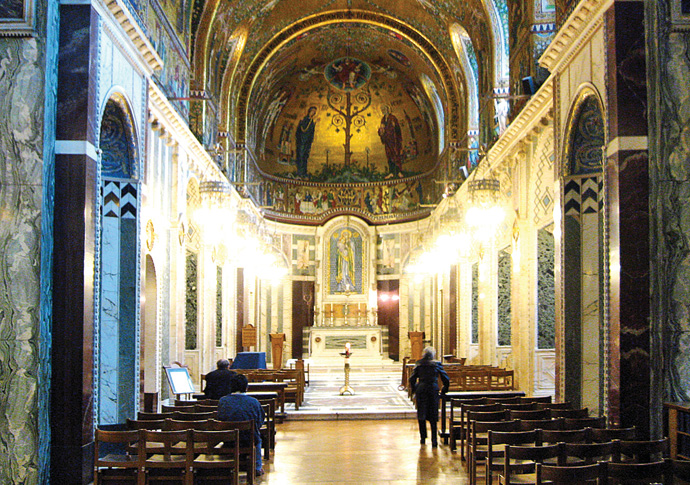 The interior of Westminster Cathedral

SPRING is in the air – and in Diary’s feet – so let us raise our faces to skywards, bask in the March sunshine and embark once more on a lockdown virtual walkabout.

We left each other last week at the gates of the Grey Coats at the northern end of Horseferry Road. Now we wiggle north-east until we reach Ambrosden Avenue, home to the magnificent Westminster Cathedral.

Built on what was once a marsh called Bulinga Fen, it had been drained by a group of Benedictine monks. The land, known as Tothill Fields, has been used for bull-baiting, has housed a maze during Elizabethan times and then became the site of a prison.

The Middlesex House of Correction opened in 1834, and was home to convicts whose crime did not warrant transportation, and was the subject of study by social scientist and journalist Henry Mayhew, who wrote the famous Victorian tome London Labour and the London Poor.

He did not hold back with stark criticism, so it is interesting to note he described the prison as progressive: not a hard thing to be when you consider the diabolical conditions of Victorian lock-ups.

While the wardens banned inmates from speaking to each other, and used the punishment of reduced rations to make it stick, Mayhew noted that convicts had only been whipped twice in five years.

The regime saw a gun fired at 6.25am to get everyone up and at ’em – and then a day was spent hard at work. A hive of industry, inmates made caulker materials for the hulls of boats fuelled by meals a day of gruel, bread and water, though twice a week meals included potatoes with tinned mutton or beef and a vegetable soup thickened with the marrowfat and flavoured with ox head.

Mayhew described how the youngest convict was aged five, banged up for stealing five shillings and nine pence from a shop, while most were teenagers. The majority were pickpockets, but lesser offences also warranted sentences, such as the game Diary called “Knock Down Ginger” as a child, namely ringing a doorbell and running away.

Perhaps the most bizarre crime he came across was that of two boys, 10 and 11, who were serving time “for spinning a top”. One can only imagine where this heinous piece of anti-social behaviour was committed to earn time inside.

This seemingly progressive place – in the awful landscape of Victorian prisons – closed in the 1880s, and the land was bought by the diocese.

Cardinal Manning could see the prison from the bottom of his garden, and believed it would be an excellent spot for a new church, as well as vastly improving his view.

The land was bought in 1884, and architect John Bentley started work on a Byzantine-style building which would, on its completion, boast 126 different type of marble hewn from quarries in 24 countries across five continents. Some parts were recycled pieces from ancient Greek and Roman buildings.

Alas, Bentley would not see the interior of the cathedral finished before his death in 1902, and his passing left something of a mystery. The scheme called for a range of mosaics and reliefs – but Bentley had kept the ideas mainly in his mind’s eye.

It meant the job of decorating continued well into the 20th century – and includes the first professional commission of the sculptor Eric Gill.

Gill, aged 31, was asked in 1913 to produce a series of 14 reliefs for the Stations of the Cross. Gill was unknown and saw the job as a way to promote his work, so he put in a low bid of £765 for the lot. Slowly but surely, he created the panels and put them in situ – but not to the type of response his works receive today. Various critics – including the cathedral’s own architect – called Gill’s work “neither suitable for the peculiar light of the Cathedral nor the Catholic public”, “cold as the mind that produced them” and “hideous, primitive and pagan”.

Gill ploughed on with his design, and said he believed the bouquets outweighed the brickbats, “especially when you take into account the infernal business of taking all the panels down again”.

Now we leave the quiet serenity of this house of God and head north into Belgravia, halting our progress in Belgrave Square.

This glorious late-Georgian masterpiece, consisting of four cream terraces, has history seeping out from beneath every front door.

Today, it is home to numerous embassies and consulates, and let us pause for a moment outside No 24, now home to the Embassy of Spain.

It was here Lord Pirrie, chairman of ship builders Harland and Wolff, resided. In July 1907, he hosted a small dinner party to which J Bruce Ismay, managing director of the White Star Line, was invited.

Lord Pirrie and Ismay were locked in conversation about how Ismay’s rivals, Cunard, had just launched the world’s two biggest ships, the Mauretania and Lusitania.

As the wine flowed, the pair drew up the designs for three ships to outdo Cunard – and from this idea came the ill-fated RMS Titanic.

Now we’ll pop a little further along the square to No 45, home in the Victorian period to the marvellous racehorse owner, Caroline Agnes née Horsley-Beresford.

Using the pseudonym Mr Manton, as ladies weren’t meant to own stables of racers, she was both feared and admired for her eccentricity. Her friends were jockeys and her rough manners shocked the society circles she was rich enough to move in. She was described as being a “very grand dame to the tips of her fingers, her appearance and her dress are extraordinary. She is accustomed to call a spade a spade, to swear and curse like a trooper. Her fat and red face and dyed blonde hair are familiar figures on every racecourse, where she is known by her racing name of Mr Manton.”

She earned notoriety at a young age, when, at Royal Ascot, she was part of a gang who hissed at Queen Victoria.

It concerned the monarch’s treatment of Lady Flora Hastings, a lady-in-waiting the Queen believed had been impregnated by a Tory MP.

Poor Lady Flora was taken for a medical examination under Her Majesty’s orders, as she had a swollen tummy. The doctors found she was still a virgin – and the swelling was due to a liver tumour, from which she soon died.

Her home is now used by the government of Malaysia, and can be seen in the 1954 Gregory Peck film, The Million Pound Note, in which the actor watches the paper fortune flutter away on a stiff breeze from Mr Manton’s doorstep.