Last Highbury ‘save the trees’ protesters are evicted

Final eco-activist is removed after defying bailiffs in 7ft ‘tunnel’ 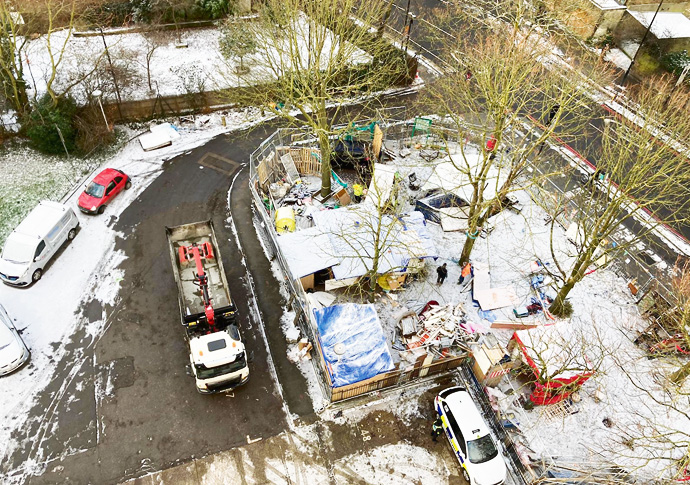 BAILIFFS have removed the last protester attempting to “save the trees” in Highbury after she was evicted from a short tunnel.

A 50-strong team was needed to extract a handful of campaigners including Maria Gallastegui, 62, at Dixon Clark Court early on Tuesday morning – the scene of a long dispute over a redevelopment project.

Activists had dug a seven-foot “tunnel” at the camp to prolong their occupation of the site.

It was not as extensive as the network created by protesters currently in a stand-off at Euston over tree-felling and HS2 railway works, although there were connections and solidarity between the two groups.

Ms Gallastegui, who was evicted after spending 12 hours underground, said she had planned to be there for at least three days.

“You don’t really want to eat when you’re down in a tunnel, you just don’t have the appetite,” she said. “You just want to remain calm, tranquil and peaceful and be in the moment and concentrate on trying to protect trees and the environment. 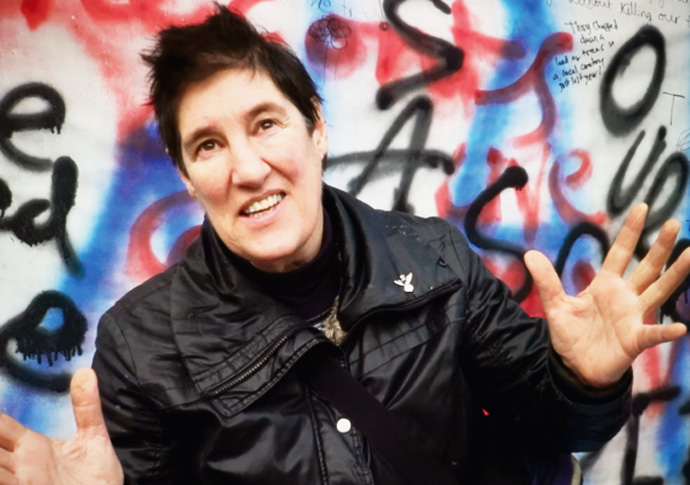 “You’re trying to maximise the message to get out to the public that people are concerned. It sometimes seems a bit extreme but this world is hard to wake up.”

Ms Gallestegui had been involved in the HS2 protests in Euston and also campaigned to save “the happy man” tree in Hackney.

As a debate continued over whether the protests were holding up the construction of much-needed homes, she argued that units left empty could be used to meet the housing quota. The council has more than 14,000 households on its housing register. Government data last year showed Islington had 650 empty homes.

Ms Gallestegui said: “We are in a climate emergency. The air pollution is killing people. We need social housing but the housing capacity is huge – there are many empty properties. There are even department stores in London that might never open again. That could be land used to build homes in the future.”

Police and enforcement officers in high-vis jackets surrounded the camp at around 6am on Tuesday after a judge granted the council permission to evict the protesters known as the “Save The Trees” group.

It followed a long-running campaign spearheaded by nearby resident Conor McHugh, who died in April last year. He had guarded the trees, often on his own, whenever a chainsaw threat emerged. 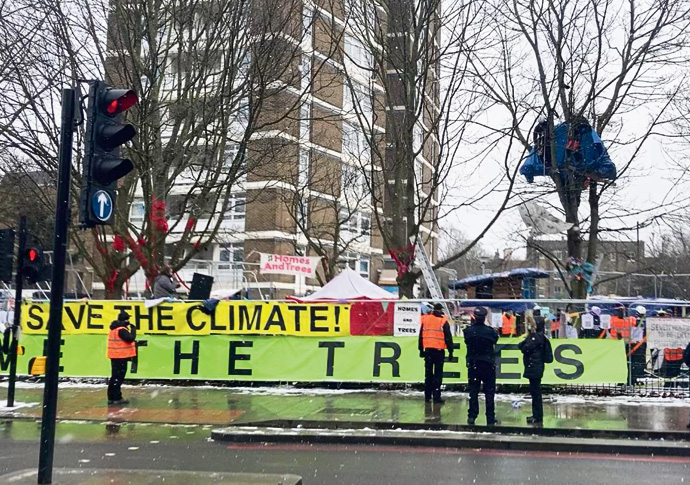 Protesters had occupied trees during the stand-off

The council is pledging to plant 13 trees on the site and a further seven nearby in mitigation – as well as another 63 new trees around the borough.

But protesters say it is the mature trees which provide greater health benefits in helping clean the air.

Caroline Russell, Green councillor for Highbury East, has called for new ways to fund social housing. She said: “In a borough with a deficiency of access to green space, it is crucial to protect every scrap of green and every mature tree.

“The council frames this as a choice between homes and trees. They are asking the wrong question. It’s not a binary choice, both are essential. It’s lazy thinking to say ‘we need homes, let’s build on these trees and the community garden’. 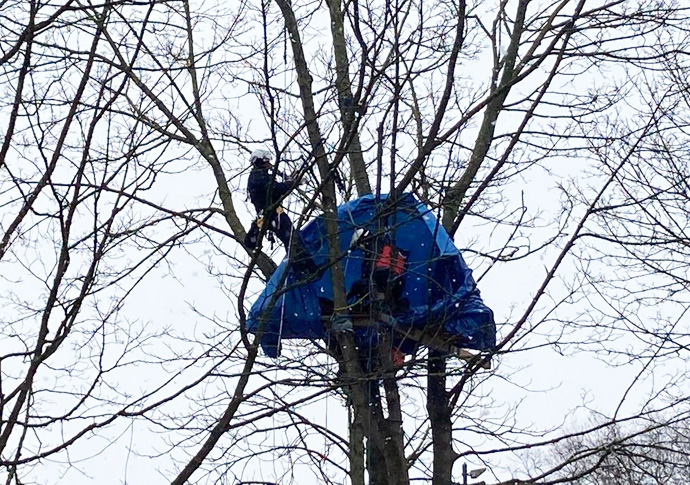 “I hope these bailiffs are listening to expert advice about the safest way to remove the protesters while respecting their right to protest against the tragic loss of yet more green space and mature trees.”

Town Hall leader Councillor Richard Watts said: “There is a housing crisis in Islington that is ruining the lives of thousands of people. Every day as a councillor I get contacted by residents living in appalling conditions. Building new council homes is an essential part of ending the horrific human scandal of London housing.”

He added: “I’m sad we’re having to take the action we are today. We’d hoped to avoid it but the protesters preferred us to spend money on an eviction, not even more new trees.

“It’s regrettable they seem to be more interested in the publicity of conflict than actually increasing tree cover.”

Islington’s housing chief, Councillor Diarmaid Ward, added: “Islington Council is committed to delivering decent and genuinely affordable homes for all, and the project at Dixon Clark Court will result in a net gain of 25 desperately needed new council homes for local families currently living in overcrowded and unsuitable conditions.

“At the same time the project will deliver 63 new trees, an extra 100 square metres of communal garden space for residents, and a number of plantings and landscaping improvements designed to improve biodiversity and address air quality issues.”

The Town Hall, however, is facing another campaign to save a tree which is earmarked to come down to make way for housing – a 70-year-old mulberry tree at the centre of a separate dispute.