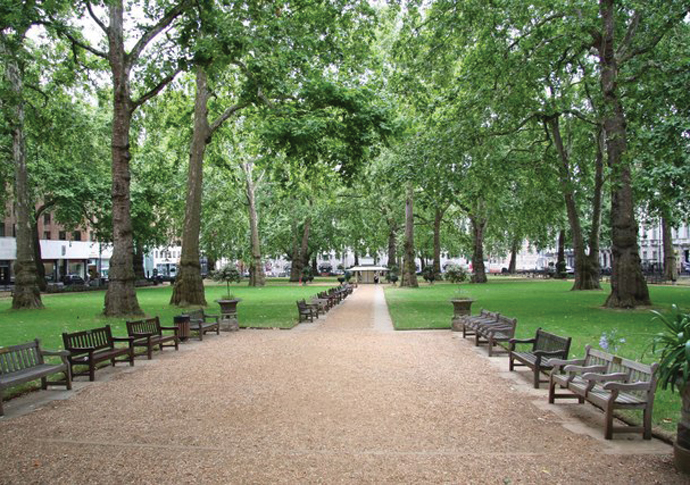 Berkeley Square, famous for the song of a nightingale

WE cheerio’d one another last week, gazing at swish old Belgrave Square, and in today’s lockdown wander we shall take a sideways glance at Belgravia before tramping north to Park Lane.

Just around the corner from the square you will find Lower Belgrave Street. Pause outside No 46, the former home of Lord Lucan and the scene of the death of his nanny, Sandra Rivett, who the peer was suspected of murdering. This case, which still intrigues due to the fact no one has ever proved what happened to Lucan after he fled the scene, has been well covered. Instead, we shall walk to Chester Square to recall a similarly horrible incident that is not so well known.

His housekeeper, Elizabeth McLindon, moved in to get things ship shape for his arrival.

But when the king turned up, there was no sign of Elizabeth, and many of the rooms were locked.

The police arrived and found her body. They discovered a note from an Arthur Boyce, asking Elizabeth why she had not been in touch – and so they sought him out.

Boyce claimed they were engaged, but detectives discovered he was a bigamist and con man. They also heard from an Army friend of Boyce’s, who said his service revolver had gone missing – and he suspected Boyce had taken it. Suffice to say, the gunshot that killed Elizabeth came from this weapon.

It came out that Elizabeth had found a wedding invitation with Boyce named as the groom, and another woman as the bride. She confronted him – and he killed her. Boyce claimed Greek Republicans had attacked Elizabeth after coming to the house to look for the king. The jury thought otherwise, and the Chester Gardens killer was sent to the gallows.

Let us move on to brighter topics, and head north to Park Lane.

Its current layout was created by pinching 20 acres of Hyde Park in the early 1960s to build a racetrack of a dual carriageway. If we look carefully we will see, at No 90, a blue plaque marking the residence of Moses Montefiore.

This fascinating character rose from being the grandson of a poor, Italian / Jewish immigrant to the highest echelons of society. Elected the Sheriff for the City of London, he became a respected philanthropist and fought for civil rights.

Moses got into banking but was swindled out of £30,000 in his early 20s and had to start afresh. The scamster, Elkin Daniels, used a wheeze involving raising multiple loans on the strength of one cheque. The burden of making good these promises fell on Moses’s shoulders, while Daniels hot-footed it to the Isle of Man.

Fortunately, Daniels was arrested and brought back to face trial. His capture, however, caused consternation on the island: there was a Manx law that made such deportations illegal. Snatched at night and dragged to a waiting boat, Daniels’s fate gave the heebie-jeebies to many wanted for crimes on the mainland.

This early setback did not faze Moses, and he built a fortune he then put to good use. He became a key social reformer – Charles Dickens noted Moses’s work in his diaries – and campaigned to abolish slavery. He organised loans to pay off sugar cane producers – a vile thought, but a vital piece of realpolitik needed to get the 1833 Slavery Abolition Act passed.

Accounts portray a humble man with a laugh in his heart, illustrated by the following story. Moses sat at a posh dinner next to a Lord of the Realm, who casually said he had recently returned from Japan, where they “have neither pigs nor Jews”. Moses replied: “In that case, you and I should go there, so they have a sample of each.”

Onwards, into Mayfair, where we shall consider a particular facet of this neighbourhood.

Mayfair is tucked in (as if by a butler) between Park Lane, Oxford Street, Regent Street and Piccadilly. Home to the seriously wealthy, it has around 350 residences and nine out of 10 employ full-time servants. Behind these stone façades, iron railings and original shutters, there are more people in domestic service today than in the Georgian period.

Our entry point is by the Dorchester Hotel, which leads to Hill Street. Recent research shows that households here have a minimum of four staff working full time. Larger spreads – the £50million mansions – enjoy a complement of nanny, butler, driver, gardener, maids, bodyguard, personal trainer and the glue to hold it together, the housekeeper.

At the eastern end of Hill Street, we come to Berkeley Square, a plane tree’d space whose nightingale Dame Vera Lynn sang about.

Jeeves, who for Wooster performed single- handedly all the jobs mentioned earlier while simultaneously getting his boss out of scrapes, was stationed with Bertie in Berkeley Mansions, Berkeley Square. The address is, however, a figment of PG Wodehouse’s ticklish imagination.

Jeeves’s imaginary stomping ground has not always been the sole preserve of the wealthy. At the turn of the 19th century 20 per cent of its 1,500 homes were owned by rich folk.

Today the figure is nearer 90 per cent.