No wonder sponsors for the mound were hard to find 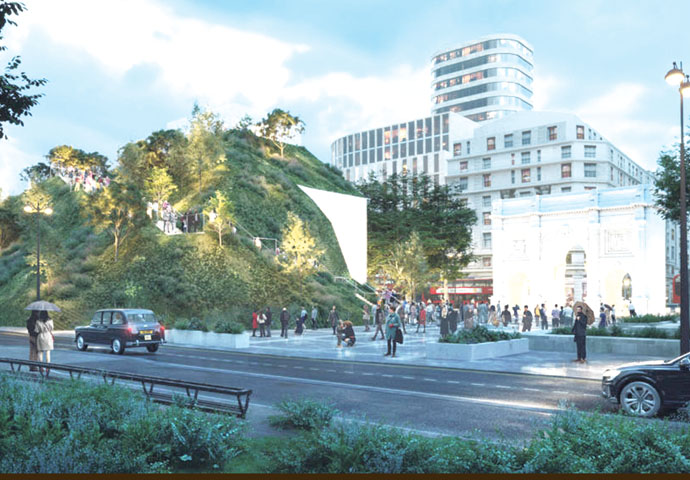 The mound never lived up to design expectations

• AS Westminster Conservatives prepare to start pulling down the failed £6million Marble Arch Mound on January 9, a copy of the city council’s sponsorship “prospectus”, which hoped to raise over £400,000 from the private sector to defray the costs of the project, has been discovered by Labour councillors.

The council’s prospectus offered four levels of sponsorship for the mound, which it called “London’s newest tourist attraction”, starting with £250,000 for “lead partner” where: “Lead partners will be able to use the facility for multiple private hires and receive unlimited corporate access.”

Because of the abysmal public and media reaction to the mound, private sector sponsors have been hard to find, with the council admitting that only £160,000 has been pledged by sponsors.

It is believed the Portman Estate, New West End Company, BT, and Marble Arch BID, have been the only sponsors. However according to council officers, the authority has only received £30,000 from sponsors so far. A promised “gala launch event” for sponsors never took place.

The city council also promised sponsors to expect huge publicity for their involvement. “Marble Arch Mound is a new London icon… We therefore expect it to receive significant media coverage both prior to its opening as well as throughout its operation in the summer months and leading to the Christmas period.”

The council certainly got this final prediction correct. The mound is first on The Daily Mail’s list of white elephants of 2021 https://www.dailymail.co.uk/news/article-10115535/The-worlds-WORST-white-elephants-including-6million-Marble-Arch-Mound.html

Just like Boris Johnson’s failing government, the Westminster Conservatives have yet again over-promised and underdelivered on the mound project, wasting £6million of public money on a scheme that cost three times more than original estimates.

The exaggerated claims the council made were never likely to be fulfilled and it is no surprise sponsors were very difficult to find.

The Westminster Conservatives have yet again shown themselves to be very poor guardians of public money at a time when public services are being cut and when every penny counts to help the young, the elderly, and others, who are in need of assistance.