Peter Boizot: ‘A colossus of Soho and the nation' 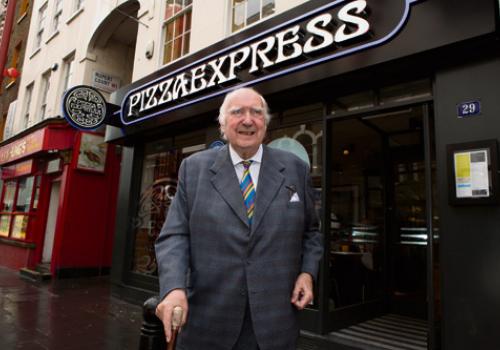 Peter Boizot outside PizzaExpress in Wardour Street in 2013

HE was the man who brought pizza to London.

Peter Boizot, who died on December 5, aged 89, had a wanderlust and an entrepreneurial spirit that saw him spot a niche in the market and power through with his ideas.

He opened the first PizzaExpress in Wardour Street in 1965 and went on to combine two of his great loves – food and music.

From that first pizza grew a multi-million-pound empire with more than 450 branches in the UK and across the world.

Those who knew him described him as a “colossus of Soho and of the nation”.

Flamboyant and a bon vivant, he liked nothing better than to throw a party – the Kettner’s ones were legendary – and had a deep and enduring affection for Soho.

According to Leslie Hardcastle, honorary president of the Soho Society, Peter was “a lovely man in every way”.

He housed the first office of the Soho Society at his Dean Street premises and took a leading role in the society’s annual festival, organising the Waiters’ Race, compering the event and presenting prizes.

Born in Peterborough in 1929, Peter, whose surname originates from northern France, credited a short stint in Italy au pairing and teaching English as a defining time in his life.

A vegetarian from the age of six, he survived on chips and Heinz baked beans for much of his early life, but when he bit into his first pizza while in Italy he realised it was love.

After National Service he read history at St Catharine’s College, Cambridge, where he was a keen chorister.

With a restless spirit he took on a series of jobs around the world and in every one made a success of them, mixing charm and his natural ability as a salesman.

He was captain of a merchant ship, barrow-boy and hit the big time in his role as a salesman for an American company.

But he was never driven by money alone, and once admitted: “I’d like to think that all things in my life are concerned with love.”

When he settled back in England, he gravitated to Soho and it was here that he opened the very first pizza restaurant – but not before he and some friends had to knock a hole in the wall to accommodate the huge pizza oven imported from Naples.

PizzaExpress was soon a huge success and a few years later, in 1969 at the Dean Street branch, he began to bring music into the restaurant. In particular, jazz. Over the years Ella Fitzgerald, Amy Winehouse and Jamie Cullum would perform and jazz venues at his other restaurants would pop up.

A lover of art, he enlisted the help of Enzo Apicella to help design his restaurants.

He sourced only the finest ingredients for his pizzas and was the first to import the lager Peroni to the UK.

He introduced the Veneziana pizza and some of the profit from the sales for it has raised £2million for the Venice in Peril fund.

Although Peter sold PizzaExpress for £15million in 1993, he remained its president and was forever linked to the brand.

He dabbled in other businesses… he once owned a casino and also bought Peterborough United Football Club in 1997; and his investment in his home town, saw him dubbed Mr Peterborough.

An active supporter of the Liberal Party he twice stood as the Liberal candidate for Peterborough at the general elections of February and October 1974.

He was awarded the MBE in 1986 “for political and public service”.

But he will best be remembered for the dish he so stylishly brought to London, as he well knew when he gave his autobiography the title, Mr Pizza and all that jazz.

“He never lost his love for the Soho village,” said Mr Hardcastle.

“He was a seeker of fun in everything he did. He was idiosyncratic, impossible at times, indefatigable, and a lovely man in every way.”