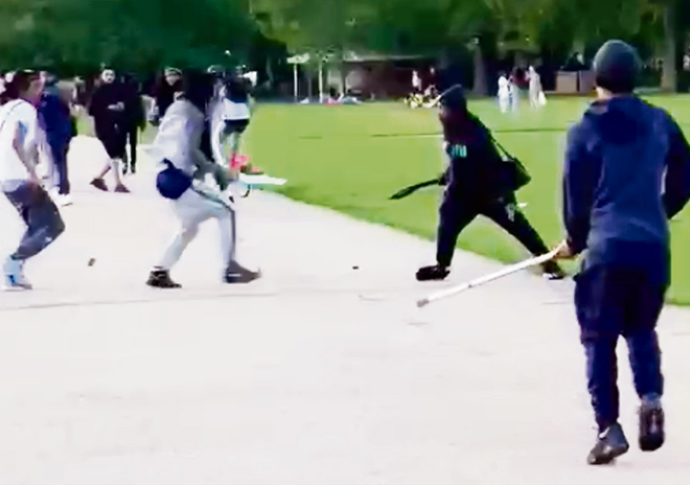 A DECISION not to give priority to police for the Covid vaccine and years of funding cuts have created a “perfect storm”, police chiefs said this week following uproar over a stabbing in Hyde Park.

The Police Federation said “a reduction in officers on the street” meant violent crime in public places would rise.

Knife fights are more prevalent in the summer when heated exchanges can often lead to weapons being brandished over trivial disputes.

A group of boys was filmed waving machetes in Hyde Park last week in a row that led to one teen-ager being stabbed and taken to hospital.

The federation said that the Hyde Park fight footage was shocking but officers were confronted by such scenes every day.

“There’s a reduction of officers on the street as the government won’t give our colleagues the vaccine. This creates a thinner blue line to deal with knife crime and everything else we have to deal with”, the federation said in a statement.

“We are sadly hitting a perfect storm. We don’t have an endless supply of officers. When officers are policing the regular pro­tests we are seeing, they are drawn from other parts of London/boroughs. Police numbers matter. The incidents of knife attacks we are sadly seeing on video are happening every day, somewhere.”

The Police Federation is a group controlled by serving police officers.

It aims to promote the interests of members but it has no political affiliations or powers to call a strike.

Its chair John Apter said officers felt let down by the government that did not prioritise them for vaccination.

In a speech to the federation annual conference he said promises had not been fulfilled and “the result is that my colleagues do feel a sense, a deep sense, of betrayal”.

On the Hyde Park stabbing, Detective Superintendent Alex Bingley said: “The brazen violence that was witnessed by many people enjoying the sun in Hyde Park was both shocking and unacceptable.

“We are doing all we can to track down the individuals involved and bring them to justice.”