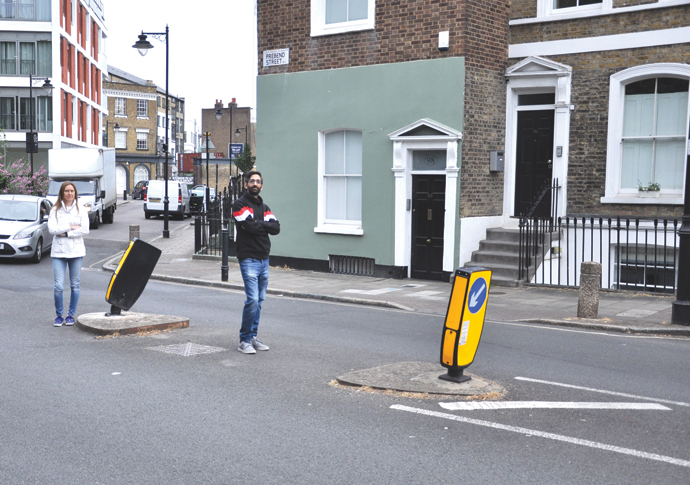 Clare Cornell and Manny Akhtar and a bashed up bollard

Low-traffic neighbourhoods allow residents to park their cars on their own streets, but ban through traffic from the roads, often called “rat-running”.

Schemes had been developed for Mildmay and Caledonian wards, paid for by money from the Public Works Loan Board in February.

Another low traffic neighbourhood in Clerkenwell could be created with Transport for London money.

But a massive roll-out of the neighbourhood plans in the wake of the coronavirus crisis were last week revealed by council leader Richard Watts, with up to a third of the borough earmarked for change.

No further details are so far available about the cost of the plans, or the location of the neighbourhoods, but the Town Hall has said it hoped to keep costs down by using relatively inexpensive measures such as bollards and banned turns.

It said it would be consulting with residents through an online tool called Commonplace, but hoped to have much of the work completed by the end of the year.

One ward that has experienced problems with rat-running for years is St Peter’s, where residents told the Tribune the popularity of services like Ways and Deliveroo has created the ideal rat-running conditions through their previously quiet residential streets.

Clare Cornell of Prebend Street said: “Lockdown has shown us how busy these roads get during normal conditions.

“Streets here are used as rat runs. Even before the council announcement we have been looking at ways to improve the situation here. Residents have caught around 20 incidents on camera on this street. Low-traffic neighbourhoods would certainly go part of the way to solving the problem.

“Maintaining quality of life is more important than shaving a couple of minutes off a driver’s journey.”

Manny Akhtar of Basire Street said residents had been collecting data and concerns from people in the area, and collating the information on a website.

“We’d love to engage with the council about how to improve the area,” said Mr Akhtar.

“This has been a problem for at least four years. When I moved here in 2014, it was a quiet street. But since the advent of satnav apps like Wayz or delivery apps like Deliveroo, everyone uses these streets as rat-runs to get to the main roads. I’ve seen people knocked off bikes, drivers hitting bollards and lots of near misses. It’s a good opportunity to change things.”

You can visit the St Peter’s traffic website at https://stpeters2020.ghost.io/

Transport and environment chief Labour councillor Rowena Champion said she wanted to make streets safer to residents, cyclists and walkers, and urged people to share their ideas with the council.

“We are asking local people, who know their own streets and neighbourhoods, to help create better, people-friendly streets,” she said.

“We have seen how the reduction in motor vehicle use in recent weeks has created greener, less polluted and more pleasant streets. It’s vital we build people-friendly streets for all.”

In recent weeks the council has started widening pavements in Liverpool Road, Essex Road and in Stroud Green Road, and said it is supporting changes on Transport for London-managed roads.

Campaign group Islington Clean Air Parents have been calling for change as the coronavirus crisis brought the issue of the borough’s air pollution problem back into close focus.

The group is encouraging people to decorate blue hearts and display them in their windows.

The Town Hall has set a target of becoming a net zero carbon borough by 2030. An online consultation is currently taking place on its Vision2030 plan, which has replaced a series of workshops and public meetings cancelled since the coronavirus outbreak.