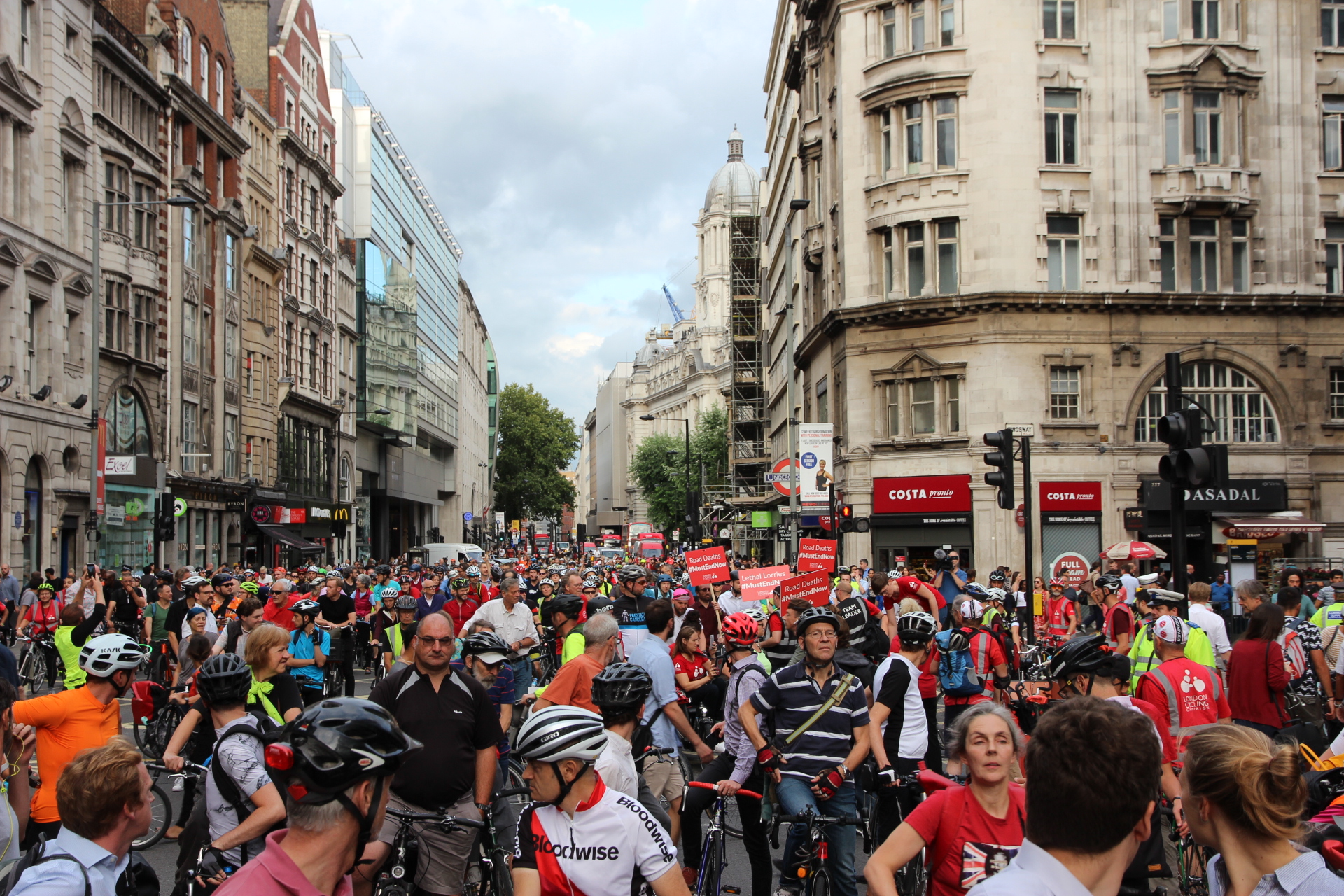 DEADLY delays to road safety works can be laid bare today after the fourth cycling fatality at an accident blackspot within five years triggered a mass protest at the “lack of action”.

The New Journal can reveal that plans to transform the dangerous roads of Holborn were blocked by Transport for London in 2015, during Boris Johnson’s time as London Mayor.

Dr Peter Fisher, a world-leading homeopathist who was one of the Queen’s doctors, died in a collision with a lorry as he cycled to work along High Holborn last Wednesday.

Safety campaigners yesterday (Wednesday) expressed outrage at the revelation that potentially life-saving changes had been rejected.

Around 400 cyclists joined the demonstration on Monday evening. Many of those present spoke of a grim sense of deja vu, having joined protests in the wake of previous tragedies.

Alan Neve, 54, was killed by a tipper truck in July 2013, less than 200 metres from the scene of Dr Fisher’s death. The fatality led to scenes of mass protest that were repeated this week.

Phil Jones, then Labour councillor responsible for regeneration, pledged Camden Council’s support for removal of the gyratory. Four months later, Francis Golding, 69, a leading architect and planning consultant, died after being hit by a coach in Southampton Row. A coroner investigating his death in April 2014 said that she was “disappointed” that progress had not been made and issued a “prevention of future death” notice ordering the council to address the dangers. 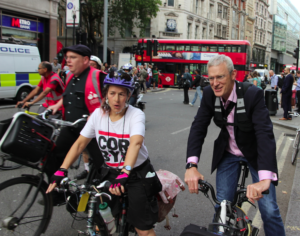 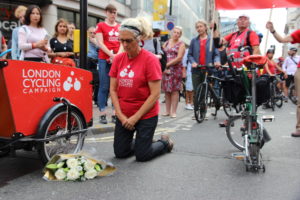 Federica Baldassa, a 26-year-old who had just landed her dream job in the fashion industry, was killed by a delivery lorry as she cycled along nearby Vernon Place in 2015. By this point the council had been working on a “transformative change in the area [that would] deliver significant improve­ments for pedestrians and cyclists”. Traffic consultants were appointed and TfL gave £100,000 for Camden to carry out “feasibility studies”.

But in 2015, TfL, then answering to Mr Johnson, rejected a bid to fund the work. The Town Hall had developed four options, three of which included the removal of the so-called “Holborn gyratory” – described by campaigners as a “tangle of one-way streets” ­– and requested funding for work to begin in 2016. TfL said that it was not “viable” because of the impact on traffic, particularly on bus routes, and sent planners back to the drawing board.

Architect Peter Murray, who was a friend of Mr Golding, helped establish the Construction Industry Cycling Commission in response to his death. Mr Murray, who joined the protest on Monday, said Holborn is a “nightmare” area, adding: “Absolutely nothing has changed.”

Responding to TfL’s decision not to fund the works, he said: “Shaving a few minutes of someone’s journey is seen as more important than saving someone’s life. That is what needs to change.”

Alex Raha, who commutes to work in Great Ormond Street, said it was “ridiculous” that no action had been taken since Mr Neve’s death five years ago. “How many more people are going to be killed before something is done,” he asked. 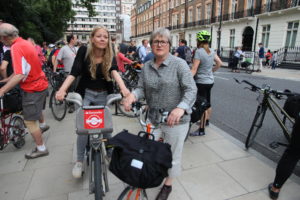 Justin McKie, chair of Regent’s Park Cyclists, said it was a “massive shame” that TfL had not been willing to fund Camden’s proposals. “[London’s walking and cycling commissioner] Will Norman, supported by Sadiq Khan, needs to break some political eggs quickly if he is going to make any difference at all during his term. That’s what will save lives,” he added.

BBC radio presenter Jeremy Vine joined the tail-end of the protest. “There are certain junctions that all cyclists know are too dangerous,” he said. “I’m just trying to stay alive because I have two young daughters. Cyclists are dying and somebody needs to get across it.”

Simon Munk, from London Cycling Campaign, said the fact that a “very progressive” council was struggling to get improvements done showed a “very clear pattern”.

“Ultimately, it comes down to the Mayor,” he said. “He made a promise to London and he needs to get on with it much quicker.” Attempts to introduce cycle infrastructure in Swiss Cottage and Tavistock Place have been stuck in a legal quagmire after challenges from residents, neighbouring councils and black cabs. 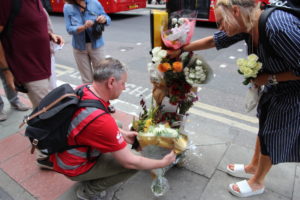 “These aren’t competing interests, they are overlapping interests,” Mr Munk said. “Everybody wants to get around and be healthy.”

Ben Plowden, TfL’s director of strategy and network development, said: “We are working with Camden Council on proposals to reduce road danger in the Holborn area.”

A spokesman for Mr Khan said he wants to “work with boroughs to supercharge the delivery of cycle infrastructure” and is “investing record amounts to make London’s roads safer for cyclists and pedestrians”.

In June this year, the council agreed plans to close off two junctions to the south side of Bloomsbury Square and ban the left turn at Vernon Place onto Southampton Row for all vehicles except bicycles. It is hoped this will reduce dangers at the spot where Mr Golding and Ms Baldassa died, but the proposals fail to take on the Holborn gyratory as a whole.

Alan Neve died five years ago and, below, Francis Golding died at a nearby spot in Holborn four months later 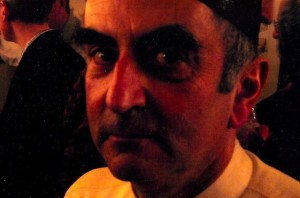 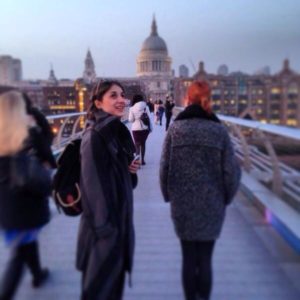 Federica Baldassa was killed in 2015

The latest victim of Holborn’s deadly roads was a world-renowned expert in homeo­pathy who had cared for the Queen for more than a decade.

Dr Peter Fisher, a father-of-two who lived in Highgate, was medical director at the Royal Hospital of Integrated Medicine in Great Ormond Street. He held the title of Physician to Her Majesty The Queen. His family laid flowers at the scene of his death, close to the junction with Newton Street, following the safety protest on Monday evening. 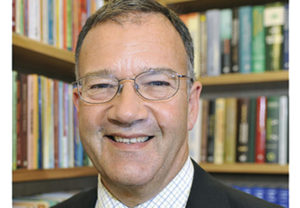 They said in a statement: “We are all devastated by his sudden loss, as he had touched deeply so many of our lives.” They described the 67-year-old as a “loving man, father, son and dear friend who has been tragically taken from us”. He was “devoted to his cause” and a “global authority in his field”. Among those to leave tributes at the scene were former patients.

“You are irreplaceable and I thank God for you being in our lives on our journey of sickness,” one message read. He regularly debated the efficacy of homeopathy with popular science figures Rich­ard Dawkins and Ben Gold­acre.

Dr Gill Gaskin, medical director at University College London Hospital, said: “Peter was a highly-regarded colleague and friend of many at RLHIM, where he worked for more than 35 years.” Buckingham Palace said the Queen had been informed of his death.