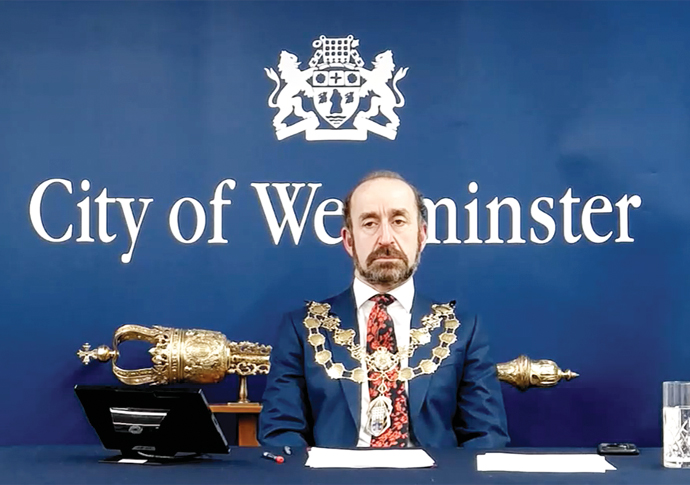 CONSERVATIVES have voted in favour of a council tax increase for the first time in years despite protests from the Labour group.

The 3.5 per cent rise, which is below the maximum rise of 5 per cent available, follows a debate at the full council meeting on Wednesday. This includes a 0.5 per cent increase to general council tax on top of the social care “precept” of 3 per cent.

This means around £15 on top of an annual band D council tax bill, according to council leader Rachael Robathan.

Labour – traditionally a tax and spend on public services party – called for a tax freeze arguing the public should not be hit with costs of recovering from the Covid-19 pandemic.

They say the government spent billions of pounds contracting “their mates” during Covid and can find money to properly fund local government.

“Now is not the time for a council tax rise,” said Labour group leader Cllr Adam Hug. “Council should be banging the drum for a better deal for local councils.

“There has to be a budget available to stop the butchering of local government finances.”

Cllr David Boothroyd told the meeting that the council tax system was “hideously regressive” and said it was “long past time to get rid of it”, suggesting a different set-up based on a sliding scale of home value.

He added there had been a “litany of failures” on major projects, before accusing the council of being naive in believing Conservative ministers who have said during Covid “spend now and the government will set you right”.

Offering an analogy, Cllr Boothroyd said: “You remember Lucy in Peanuts, always offering to hold the ball? Charlie Brown knows every time she will pull the ball away and he will go flying through the air. Every time Lucy reassures she won’t.

“My message to the council is stop being Charlie Brown. This government may tell you they will do you right and fund you properly. But they will take the football away. They are not your friends. They will not do you right.”

In neighbouring Camden the leader of the Conservative opposition group this week criticised the Labour-run administration for increasing council tax there.

He said there was a £43million gap in budget for the next two years, adding that technology like “cobots” – talking robots built for human interaction – and the Amazon Alexa device could be used to improve care home services.

The meeting saw the usual exchange of passive-aggressive insults with Labour councillors taking swipes at council projects like the “hollow mound at Marble Arch”, and the Tories rolling eyes and accusing them of “financial illiteracy”.

Cllr Paul Dimoldenberg’s proposals for an art house at the empty Debenhams building in Oxford Street was described as “one nugget of vision” by leader Cllr Robathan.

The normal cut and thrust of public debate is disrupted by the online format with councillors muting themselves mid-speech, or forgetting to switch their cameras on.

Long speeches from leading councillors mean back-benchers do not get to speak at the full council meeting – which is supposed to be for all representatives – leaving it as essentially just an extended version of a cabinet meeting.

Westminster’s Lord Mayor, Jonathan Glanz, appears to be at City Hall sitting in full regalia in front of the mace, while other councillors are speaking from inside their homes; with Cllr Hug flaunting an extensive collection of Iain Banks crime novels on his attic book shelf.