The folk who live on the Hill 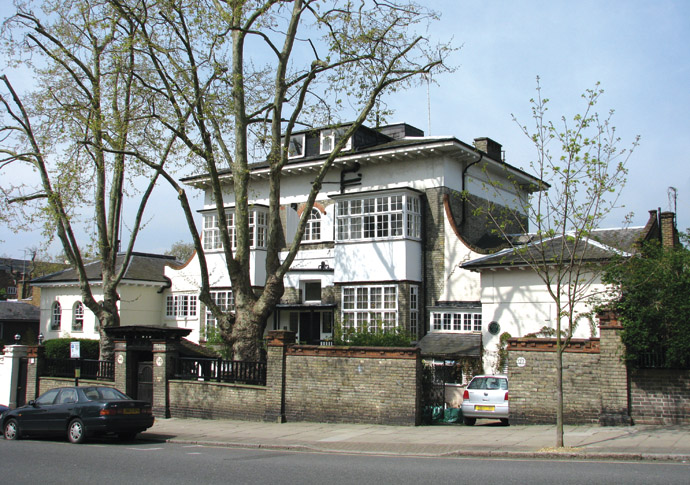 WE left our virtual tour of Westminster on the corner of Marlborough Place, St John’s Wood, last week, and it is from here we set our dials to “adventure” and proceed once more.

Described by George Bernard Shaw as possessing a singing voice that was “humanly speaking, perfect… not a scrape on its fine surface, not a break or a weak link in the chain anywhere; the vocal touch was impeccably light and steady, and the florid execution accurate as clockwork”, it is no wonder Santley’s successful singing career stretched over six decades.

While known for his role in high culture, Santley recognised the cultural importance of music hall, and would amuse friends by mimicking common-sounding stars such as Marie Lloyd, Harry Champion and George Robey, when he wasn’t singing fancy stuff in Italian.

From Santley’s place we head on to Carlton Hill and gaze at the house of sculptor Sir George Frampton.

The abode was originally built in 1873: Sir George took it on in 1908, and he wasn’t happy with his purchase, describing it as a “Mid-Victorian suburban house of a commonplace and ugly type”. Being an advocate of the William Morris school of Arts and Crafts, he wanted fresh workmanship to knock it into shape.

Lady Frampton had her own artist’s studio built, Frampton designed a fireplace for the sitting room and Morris provided inspiration for the wallpaper.

Sir George’s studio was described as “perfectly lighted and of great extent, but with no pretence of adornment… literally a workshop designed by and for the use of a workman”.

Frampton, who lived there until his death in 1928, created perhaps his most famous sculpture, of Peter Pan for Kensington Gardens, while in Carlton Hill.

Decades after his death, another sculptor took on his workspace to create renowned pieces. Arthur Fleischmann moved into the studio in 1948 and it inspired his work in bronze and perspex. His success was such he was commissioned to create pieces of not one but four popes from Carlton Hill.

These impressive streets were once the haunt of another type of craftsmen – the Warsop family, who were the premier makers of cricket bats in the Victorian era.

In 1870, Benjamin Warsop had moved from Nottingham to St John’s Wood and with the help of his four sons created the renowned brand that bears the family name.

In 1888 Ben and his family travelled to Essex to cut down a willow that soared over 100 feet and had a diameter that was nearly six feet across.

The family would make 1,179 cricket bats from this sole specimen, and Benjamin’s craftsmanship was such that, in 1893, WG Grace ordered them to make him a version of their famous “Conqueror” bat.

Their St John’s Wood base had a ground floor area for the sawing up and treating of willow trunks, while upstairs these materials were then fashioned and shaped by hand for players to guard their wicket with.

Demand continued to rise as Warsop won contracts to provide Lord’s, Test Match sides and almost every public school in the country with their polished wooden blades.

Such was the Warsops’ reputation they had to be careful about making sure they could source enough quality willow.

In 1909 the workshop was looking for new suppliers – and word got round. They were sent letters from estates, councils and farms across the country, all offering wood, and they gathered enough stock to see them through the years of the Great War.

From this classically English pastime to something more murkily internationalist as we head to Grove End Road.

It was from a basement flat here that Edith Tudor-Hart would earn the title The Grandmother of the Cambridge Five.

Born into a socialist family in Austria, Edith moved to London to train as a nursery teacher in the 1920s. She was told the leave the country in 1931 after being spotted at a communist rally. Edith then went to the famous German design school, the Bauhaus, and studied photography, before falling in love with English doctor Alex Tudor-Hart. The pair were forced to leave Austria in 1933 due to her Jewish background and communist sympathies – but it was during this period she began working for the Soviet Union’s secret police, the NKVD.

In London Edith set up a photography studio and her subject matter reflected her political interests – she sought out those who had been hit by the Depression, and highlighted the disasters of capitalism.

After she and Dr Tudor-Hart divorced, she lived in her small Grove End Place flat – and it was here she began to cause mischief that would reach the top of the Establishment.

She had met Cambridge spy Kim Philby in Vienna and when Philby returned to London she introduced him to Arnold Deutsch, an academic who was actually a soviet agent.

Philby was recruited on Edith’s say-so – and declassified KGB files describe how Edith and Philby walked from her home to a rendezvous in Regent’s Park with Deutsch for the first time, taking a zig-zag of a route to throw any tails off.

MI5 rumbled her, and in 1952 they raided her flat and quizzed her for 48 hours. They bugged her home and followed her around but the only misdemeanour they could pin on her was not paying a bus fare.

Despite being eventually uncovered, Edith was never prosecuted and retired to Brighton to open an antique shop.

And on that slightly Lovejoy-like note, until next week.