Time for tributes to 1959 murder victim 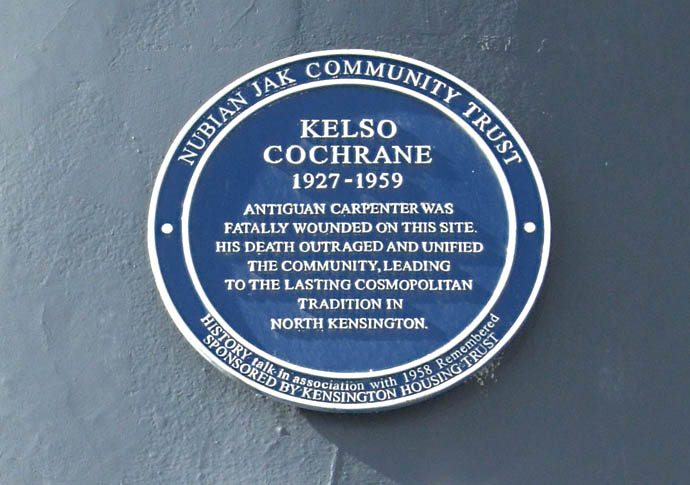 The memorial plaque for Kelso Cochrane

A COMMUNITY group will remember the life of an Antiguan carpenter whose death 62 years ago has been described as “the first racist murder in Britain”.

Grove United will pay tribute to Kelso Cochrane on Sunday October 24, at the site where he was stabbed, at the junction of Golborne Road and Southam Street, Ladbroke Grove.

In addition there will be a procession to St Michael’s Church, where his funeral took place, with a banner and percussion band.

But his killer or killers have never been identified and in May this year it was announced that detectives were to re-examine material held in connection with the case.

Marcia Haynes, chair of Grove United, said: “A short film of Kelso Coch­rane’s funeral will be screened. With the kind permission of Alexander D Great a recording of his calypso for Kelso Coch­rane will also be played. There will be inform-ation on the racist murder of Kelso Cochrane available at the event.”

At the time of the stabbing, the Notting Hill and Ladbroke Grove area was a stronghold for Oswald Mosley’s Union Movement and Colin Jordan’s White Defence League.

Mr Cochrane was walking home on May 17 1959 when he was set upon by a gang of white youths and attacked with a stiletto.

Three other men arrived on the scene and the youths ran off. Mr Cochrane died, aged 32, in hospital a short time later.

The police in 1959 did not investigate the murder as racially motivated.

Grove United is a community group for Notting Hill that has organised the October 24 celebration as part of Black History Month.

A service will be led from 2.30pm by Father Philip Corbett, vicar of All Saints & St Michael’s churches.

Mark Olden, author of Murder in Notting Hill, will speak at the event along with the High Commissioner of Antigua and Barbuda. Relatives of Kelso Cochrane and councillors have been invited.

Ms Haynes said: “We encourage participants to wear their national colours and bring their national flags in unity. When the procession arrives at St Michael’s Church there will be drumming before we enter.”

There is already a plaque (inset) on the corner building at the junction of Golborne Road and Southam Street. It was installed by Nubian Jak Community Trust, sponsored by Kensington Housing Trust.