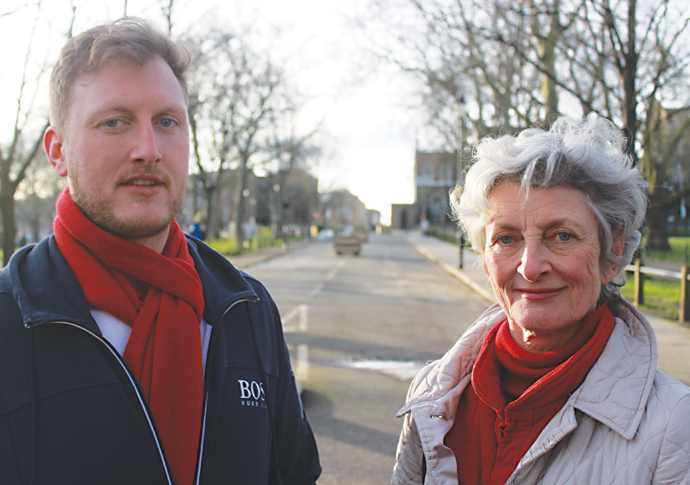 Residents Alex and Glenda Weil: ‘It feels like the decision has already been made’

THE council has been accused of being “disingenuous” over a consultation survey into closing a road running through Highbury Fields.

Residents believe the purchase of large wooden planters to block off the Highbury Crescent route show the decision has already been made.

The stretch of road which splits the park into two has been closed since 2014, when Transport for London began using it to store vehicles and equipment.

When nearby works at Highbury Corner were completed, some residents expected the crescent to be reopened.

But in December, Islington created a temporary traffic order continuing the closure, and opened a public consultation on whether it should stay shut permanently.

The Tribune has previously reported on concerns that the continued closure meant traffic was now orbiting the entire Fields.

Glenda Weil, who lives in Highbury Place, said she was shocked by the council’s approach.

“If you want to make a consultation then the road should have been opened for a time, so people can see if it works when it’s open,” she said.

“The traffic flow has changed so much in the last six years, it could even help to have this section open.

The planters blocking the road

“It’s the principle that concerns me. The council has spent money on these planters, closed the road and said they are holding a consultation. But it feels like the decision has already been made.”

In a letter to the Tribune, Tim Sayer, who lives nearby, also spoke out about the closure.

He said: “The order regarding the closure was sneaked out on a Friday evening in November and the council ignores emails querying it. Once again, the council is trying to run roughshod over local opinion; a bit like when it refused to budge over the ‘improvements’ to Highbury Corner, the negative consequences of which are still being felt.”

Alex Weil, who grew up in Highbury Place, added: “This area gets really clogged up. Delivery drivers often get stuck because apps still try to lead them down the blocked-off section.

“When it was open there were no problems, and the traffic was fine.

“But since the works at Highbury corner it has got worse. That was a big mistake, in my opinion.”

The council, however, refutes the suggestion a decision had already been taken over Highbury Crescent.

Cllr Champion said: “It is important that the voices of local residents and businesses are heard before a decision is made on Highbury Crescent, and that is why we have held this public consultation.

She added: “By closing Highbury Crescent we can reconnect the north and south sections of the park for all of the community while helping to reduce the number of unnecessary car journeys, lowering levels of air pollution and congestion and helping to tackle the climate emergency we all face.”

Highbury East ward Green councillor Caroline Russell said she agreed with the council’s decision to keep the road closed, adding: “It makes no sense for a park to be dissected by traffic cutting through a residential area to avoid Highbury Corner.”