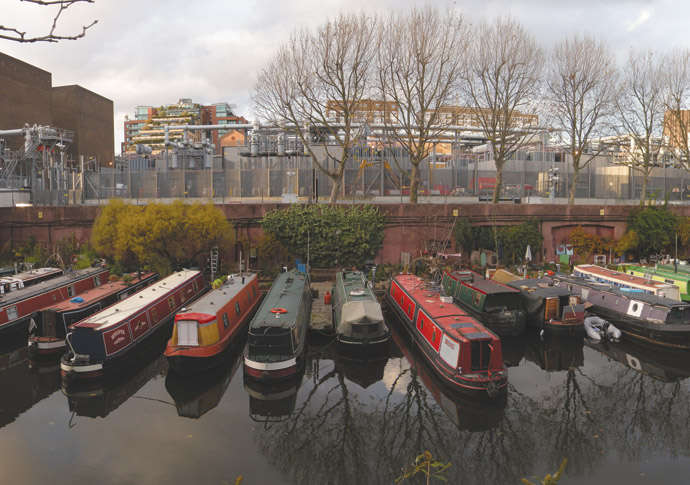 ALL right there, strollers, and welcome to another edition of Diary’s lockdown walks around the history-soaked streets of Westminster.

We parted ways last week at the Grove End Road, St John’s Wood, and from here today we shall head in a southerly direction.

Our first stop is in Lisson Grove, a thoroughfare that has a long and distinguished connection to those with an artistic bent.

Let us stop outside the Gateway Academy, a redbrick, London County Council building that in the 1940s and 1950s was known as Regent’s Park Central secondary school, which specialised in teaching typing and shorthand.

It sits on the corner of Frampton Street, named after the sculptor George Frampton (Diary passim – Ed). And Frampton is not the only arty type recognised by local place names.

After World War I, when David Lloyd George pledged to build “Homes Fit For Heroes”, the Lisson Grove area got its fair share.

St Marylebone Council built a series of blocks known as the Fisherton Street estate, and all commemorate the area’s great and good who made their names with brushes and chisels.

There is Gibbons House, named after Grinling Gibbons, a Dutch wood carver who worked on St Paul’s with Sir Christopher Wren. Eastlake House marks the life of Charles Eastlake, a celebrated Victorian furniture-maker, while Poynter House is named after the Royal Academy president Sir Edward Poynter, who specialised in grand historical dramas in oil. It was also the haunt of Sir Edwin Landseer, who sculpted Trafalgar Square’s lions, so the council plumped for a block with his moniker too.

From here we head down the road a little and to our left see a more recent social housing project known as the Lilestone Street estate. Let us look past these 1970s blocks and consider the Great Central Railway company’s Marylebone Goods Terminus, built on this site in 1899 – and, it seems incredible today, in doing so demolished two Nash terraces.

Less celebrated homes were also swept away to clear the 51 acres for the railways: 4,448 houses deemed “labouring classes dwellings” were dealt with by the wrecker’s ball.

The GCR installed a steam crane for lifting goods from barges on the Regent’s Canal and for a few decades it became a major interchange, providing thousands of jobs for railwaymen and stores clerks. There were sidings and train sheds, goods warehouses and associated industrial gubbins.

The yard also once boasted four bridges across the canal – and one still remains for pedestrians, at Paveley Street, and it is to this little bridge we now turn our attention.

At first glance it seems a strange place for such a span, heading from nowhere in particular to nowhere else.

But the answer as to why it appears here casts light on the battle for transport custom in the Victorian period.

As the railways made their sooty way across the UK, canal owners were rightly concerned as trade moved from serene waterborne haulage to the noisy, messy and very fast railway tracks. Some operators saw the writing on the towpath, as it were, and sold off their canals for conversion into railway routes. Others decided to switch to rail for their transport businesses. But the firm who owned the Regent’s Canal decided a hybrid was the answer. They created a subsidiary, the Regent’s Canal, City and Docklands Railway and designed a scheme that would see them build a 16-mile railway from Royal Oak to Limehouse. They built four bridges to carry 16 new canalside tracks, but the plans were never finished.

However, our bridge was not going to be totally useless. Instead, up stepped inventor, entrepreneur and monorail pioneer, Fritz Bernard Behr.

The son of a German doctor, he had been decorated in the Franco-German War of 1870. He settled in England, became naturalised – and then turned his talent to designing high-speed electrified monorails.

His first project was to build an experimental version through Westminster in 1886 and it impressed industrialists enough for the Thames Ironworks and Shipbuilding Company to make one of their own.

Word spread: Behr built a three-mile monorail in Belgium for the Brussels Inter-
national Exhibition of 1897 and then, at the turn of the 20th century, headed to New York with plans to create a line from Brooklyn’s South Ferry terminus out to Coney Island.

He told investors his carriages would reach top speeds of 100mph, with passengers paying a fare of five cents for the pleasure. Sadly for Behr – and New Yorkers wanting such a new fangled way of getting about – the grubby hands of money men got in the way.

The city’s transport commissioners demanded a non-refundable $25,000 deposit to consider the scheme, and then caused a scandal by privately investing in firms they would then award contracts to.

Meanwhile, back this side of the pond, Behr got an Act of Parliament passed to allow him to build a monorail linking Manchester and Liverpool at speeds of 110mph, while also working smaller, less speedy, schemes such as plans for a funicular rail up a steep slope in the Isle of Wight.

In 1903 Behr’s firm, The Listowel and Ballybunion Railway, drew up a route called the North Metropolitan and Regent’s Canal Monorail System. It would have seen a monorail run along the waterway, and the Paveley Street bridge now used for walkers was retained as it was due to be the starting point for the scheme.

By 1965 Dr Richard Beeching’s sharpened axe hung over the depot and with a wave of his red pen the entire GCR line was scrapped. The depot lay silent for a few years, and then Westminster Council began their plans to use the land for new housing, creating the estates that sit there today.