Bob Rogers, who became a fixture in Hyde Park with his signature placard, dies aged 73 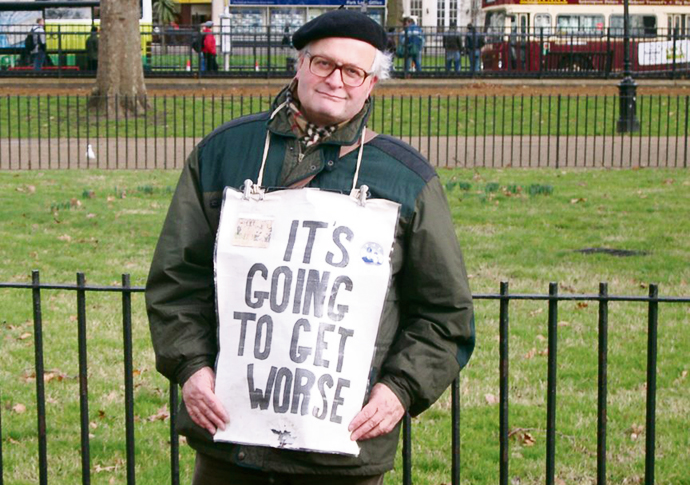 Bob Rogers, who was affectionately known as ‘Bob Doom’

HE was a man seen by millions, but known by very few.

Bob Rogers, who has died aged 73, carried the placard “It’s Going to Get Worse”.

He had been a fixture at Speakers’ Corner, Hyde Park, where he affectionately became known as “Bob Doom” after he took out his sign there for the first time almost 30 years ago.

In an earlier interview, he explained: “It was the winter when British Rail reported ‘the wrong kind of snow’ on the line and that became an Evening Standard headline.

“The next day I saw ‘It’s Going to Get Worse’ on the news stand, as I went through Piccadilly on a bus.

“So I jumped off and took it from the hoarding and put it in my bag because I like the prose style of newspaper headlines. 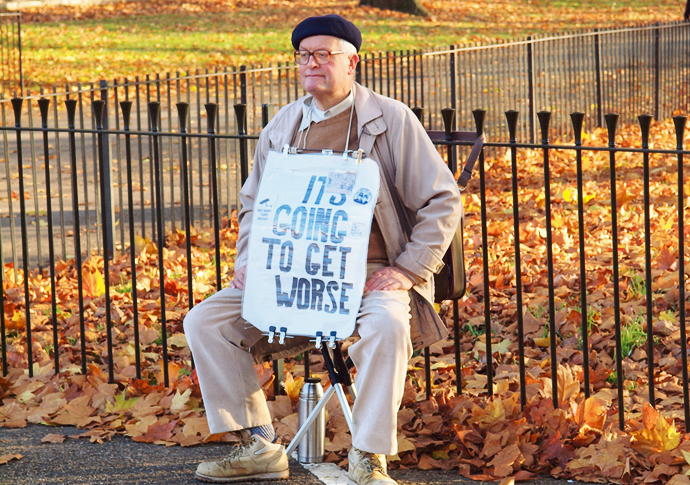 “Then I came to Speakers’ Corner one Sunday in February 1991 and everyone looked so miserable that I took it out of my bag and held it up, and it made them all smile.

“It caught on to such an extent that I am pictured wearing it in guidebooks to London.”

Born in Watford on May 6 1947 to Harold and Annie (née Downie) Rogers, he went to Westfield Community Technology College and became an insurance assessor for Royal & Sun Alliance.

His friend John Humphries said he liked to visit Germany and historical societies “especially those connected with public transport”, adding: “He assiduously maintained contacts with businesses where he had long-standing connections, including the Archive Bookstore in Bell Street, Fish Bone in Cleveland Street, the Wong Kei restaurant in Chinatown and Sainsbury’s in Ladbroke Grove.”

Mr Rogers wrote a regular column for the South East Bayswater Residents’ Association magazine and had featured in books, greetings cards and on badges. 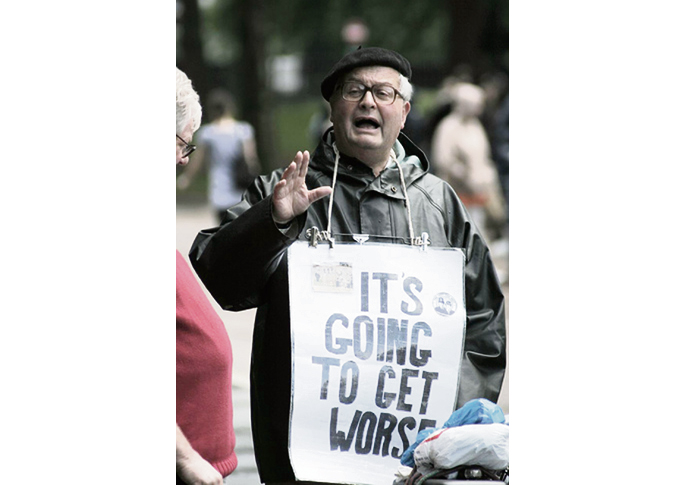 He campaigned for better toilet facilities and the elimination of graffiti; and against surveillance cameras that he believed would ensure life would only get worse.

In three audio interviews online, he speaks about soapboxes, life at Speakers’ Corner and his good friend Norman Schlund, a homeless man, with whom he used to travel around on night buses.

In one Mr Rogers recalls: “There was a time when I had personal problems. It was a great relief to be able to escape from the conventional world, and go into the world of the users of the night bus service.

“A lot of people who were homeless used the night bus.

“We would go to Uxbridge bus station, and then walk, and then get another bus which would return us to Trafalgar Square.”

He recalled two ladies who ran the tea bar in the park, one was called Rita, the other Rose.

“They saved quite a few lives. Because among the soft underbelly of Speakers’ Corner, were a lot of people who were homeless, who had mental health problems.

“A sandwich given out for free went a long way.”