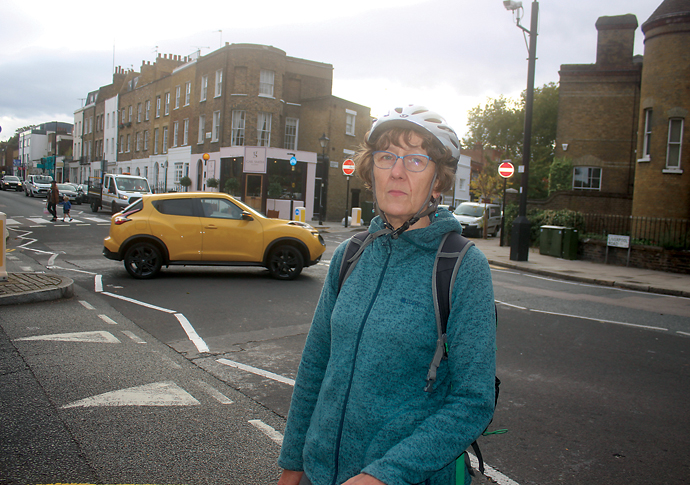 Eilidh Murray of Cycle Islington: ‘Let’s have an eye towards the future. While this is a terrible and deadly virus, some good can come out of this situation’

THE Town Hall is looking at bringing in a raft of measures to adapt locked down streets, as campaigners call for roads to be blocked from cars and pavements to be widened.

With the coronavirus rule that people must stay at least two metres apart from anyone not in their household likely to still be in place beyond any easing of the restriction, Islington is looking at how to create more space for walking and cycling, the Tribune understands.

Transport for London has already begun fencing off traffic lanes for pedestrians on some of the city’s main roads, with the use of cars now reduced. Only people on essential shopping, care or work trips are supposed to be behind the wheel.

A study by UCL’s Bartlett School of Architecture this week found two-thirds of London’s pavements are not wide enough for social distancing rules.

Meanwhile, cycling and environment campaigners have been lobbying the council to use this period to implement traffic-calming measures.

Levels of air pollution in the capital have plummeted with less traffic is on the roads, research by the National Centre for Atmospheric Science has found.

David Harrison, a spokesman for Living Streets Islington, said: “The new normal has to be radically different. The council has the powers and it could do something immediately on a temporary basis and then make it more permanent. Our streets can be transformed remarkably cheaply using planters and traffic cones.

“We most close down the rats-runs across the borough, remove parking places and widen pavements.”

Eilidh Murray, of Cycle Islington, said: “Let’s have an eye towards the future. While this is a terrible and deadly virus, some good can come out of this situation.

“If people are in the habit of running and doing exercise outside now, let’s encourage them to keep doing this with roads which don’t prioritise cars.”

Last year the council consulted on its transport and environment strategy including plans to create Low Emission Neighbourhoods (LENs) which would see roads blocked off in residential streets, except for emergency services, residents and businesses.

It is understood that Islington is looking to bring these plans forward in light of the lockdown.

Islington’s member fir environment Cllr Rowena Champion said: “The Covid-19 emergency has presented us with an unprecedented challenge, and has changed the transport environment significantly.

“We understand the need to adapt our streets in order to take account of this and to protect the health of our residents, which is the council’s top priority.”

Prime Minister Boris Johnson said this week that he believed that life after the lockdown could become a “golden age for cycling” as commuters are asked to avoid crowded buses and tube trains to limit the spread of the virus.