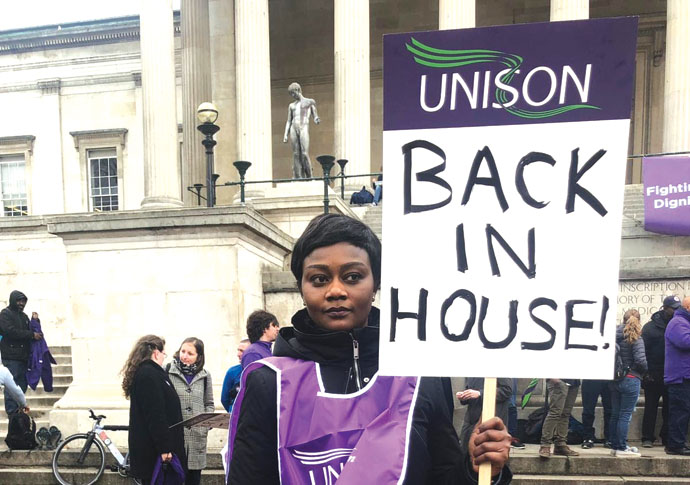 Cleaning staff at City, University of London, have now launched a petition calling on it to bring the service back in-house. The cleaners, represented by the Unison union, said they wanted to be treated with “the dignity, equality and justice we deserve”.

Directly employed staff at the university in Northampton Square get sick pay from day one but cleaners and caterers are not entitled to it unless they are ill for four or more days. City staff get 42 days holiday while clean­ers and caterers qualify for 28 days, she said.

A Unison spokes­woman, who is represen­ting the cleaning staff, added: “City offers their staff good terms and con­ditions of employ­ment, but these are not available to us. This is be­cause City out­sources the services we pro­vide to private com­panies.”

Sodexo and Julius Rutherfoord currently hold deals with the university. A spokesman for the university said that due to “challenges” related to the Covid-19 pandemic “now is not the right time to take strategic decisions”.

But the campaigners have rejected this position saying that if money is an issue then they could look at cutting the wages of the best paid at the university.

More than 100 people directly employed by City were paid over £100,000, the Unison spokeswoman said. She added: “We are a second-tier workforce. Why don’t we deserve the same benefits as our directly employed colleagues? We get sick, need holiday breaks and time off to have children too. Many of us have worked here for five, 10, even 20 or 30 years.”

A City spokesman said: “Our trade union colleagues have requested that cleaning and catering services are brought in-house. City’s council, with the executive team, have reviewed the request and decided that in the context of other challenges connected to the Covid-19 pandemic, that now is not the right time to take strategic decisions that have long-term financial and operational implications. Through contracting provisions with our external providers, City ensures that all contracted staff receive the London Living Wage.”

A Sodexo spokesman said: “All of our employees at City, University of London are paid a minimum of London Living Wage which is higher than the National Living Wage and is independently costed to reflect the cost of living. We would be happy to work with our client, our people and recognised trade unions to address their concerns.”