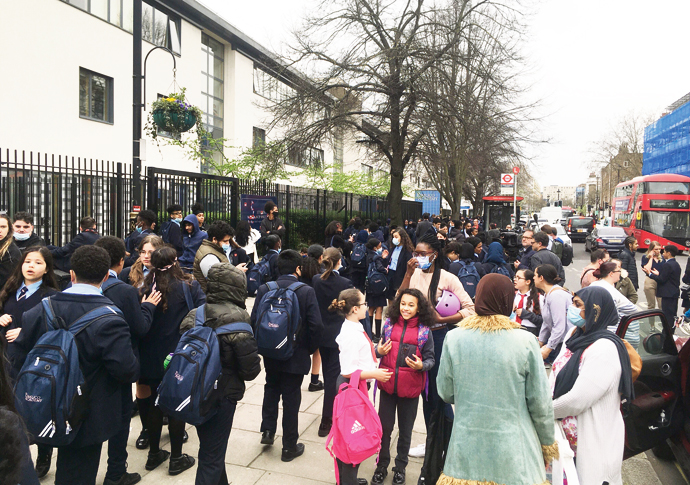 A DECISION to “rip down” the Union Flag from Pimlico Academy following its pupils’ protest reached the House of Commons this week.

Schools minister Nick Gibb was quizzed by the education committee about the row and whether schools should be forced to fly the flag.

Conservative MP for Ipswich, Tom Hunt, said that he and many parents across the country had been worried by the protests.

Hundreds of pupils had walked out of class against a “discriminatory” uniform policy and a divisive decision to hoist the flag above the school last ­summer.

They had argued the flag was for many, a symbol of divisive nationalism and British imperialism that had no place in a multicultural school.

Mr Hunt said: “I happen to think it’s quite important our young children grow up to be proud of their country and I’m on record for saying I think it should be compulsory for all schools to fly the Union Flag.”

Responding, Mr Gibb said the regional schools commissioner was working with the school and he had confidence in the headteacher and Futures Academies Trust, set up by former Tory schools minister John Nash.

On the compulsory flag-flying, he said: “These are very much matters for the school themselves to decide. We have a requirement in schools to teach fundamental British values in terms of democracy and tolerance and that’s a requirement for all schools to teach. It is important children grow up understanding our history, but it is important they understand the history of the world too.”

Future, the academy group running the Pimlico school, has parachuted in the former chief of Ofsted to advise the headteacher, Daniel Smith.

Sir Michael Wilshaw earlier this month spoke on BBC Radio 4’s Today programme about the academy’s uniform policy, which has subsequently been changed, that stated that hair styles that “block the views of others” would not be permitted and hijabs should not be “too colourful”. He said: “I support head teachers who enforce and implement a rigorous uniform policy, but you have to apply it in a common-sense sort of way.”

The National Education Union, which represents teachers at the school and has passed a motion of no confidence in Mr Smith, has also criticised the decision to bring Sir Michael in.

Martin Donohue, the senior regional officer of the NEU’s London branch, said: “Members are deeply angry about the failures of management in the school. They believe that Pimlico and Future would do better to look elsewhere for advice and best practice.”

In a statement, the academy said: “A large majority of our parents are fully supportive of the positive changes we have made”, adding: “We make no apology for taking a disciplined approach that encourages our students to take pride in themselves, their school and society at large. It also allows teachers to teach and students to learn effectively. We also encourage them to ask questions and challenge the status quo and have established channels of communication within the school that enable students to raise issues or make suggestions for improving the school community.

“We are in the process of creating a race and equality committee that will en­hance this process and are committed to involving students while we review and rewrite our PSHE [personal, social, health and economic] curriculum.”