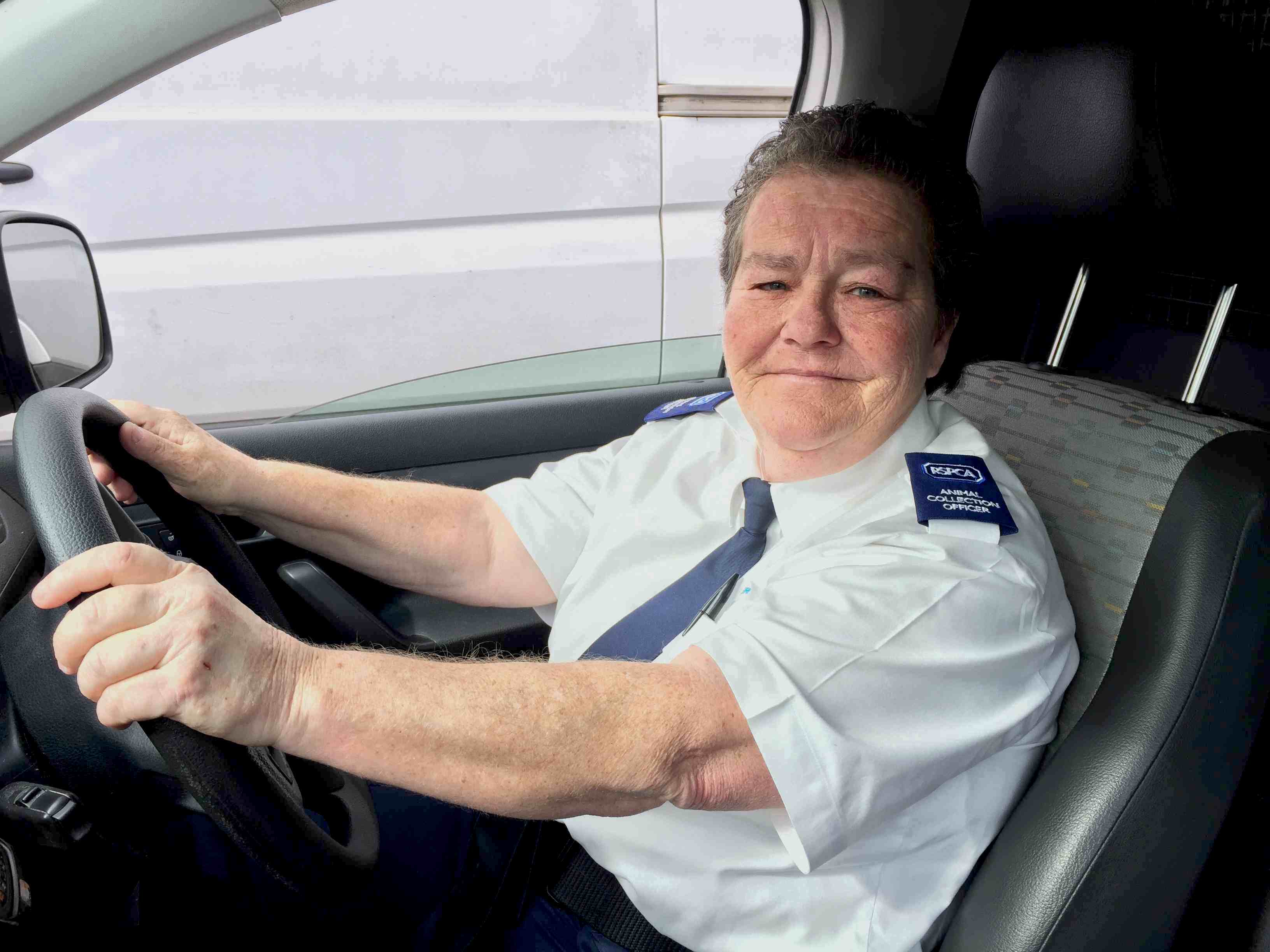 WHENEVER there is an animal in trouble in Westminster, the RSPCA’s Jill Sanders is on the case.

For 20 years, she has worked as an animal collection officer, rescuing cats, dogs, snakes, pigs, birds and even a wallaby. And in all that time she says she has only been bitten a few times. Jill heads to the rescue in her RSPCA van, whenever an animal is injured, abandoned or trapped somewhere in and around Westminster, and she often finds herself in unusual situations – scorpions in suitcases, a pig on a motorway, and a seal on a bridge to name just a few.

“Recently in Paddington there was a swan stuck on a four-storey roof,” she says. “He landed there but couldn’t take off again because they need a bit of a runway. I had to get the fire brigade out and go up in their lift to rescue it.”

The fire brigade love coming to help the animals, she says, and Jill, in turn, loves going up in the cherry-picker. Before Jill, 60, joined the RSPCA, she spent three years in the army, worked in the print trade, and then worked as a dog warden. She used to regularly appear on TV’s Animal Hospital in her current job and on April 7 will celebrate 20 years in the role. 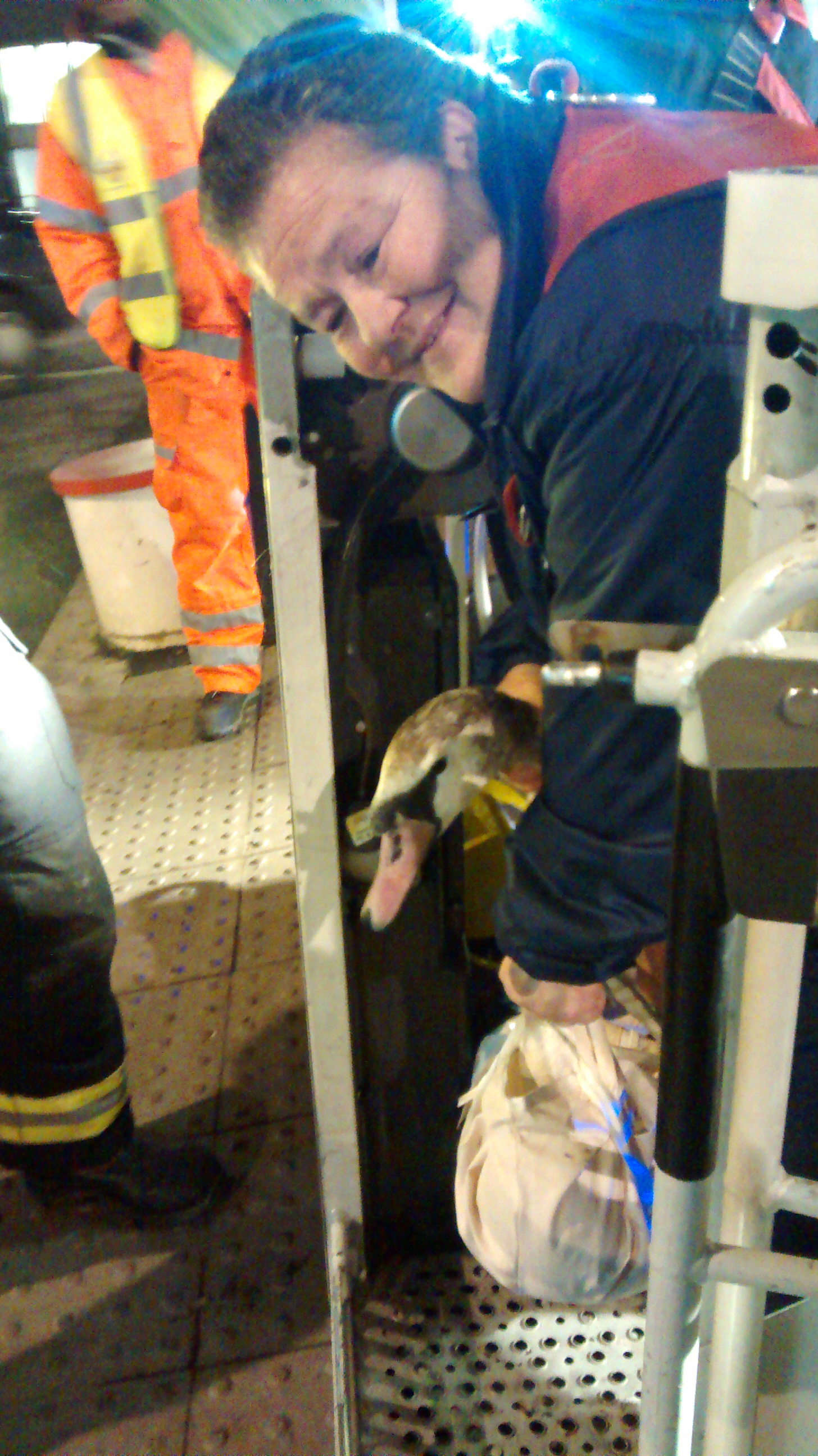 In Westminster, one of the most common call-outs is to ducks. Last summer she rescued some ducklings from the roof of the House of Commons. Jill says: “What birds – especially ducks – do is nest somewhere where it’s safe, such as roofs. They can’t do it near water as the drakes would just pester them. When they’re born the ducklings jump off the building, but like cotton wool, they float to the ground. The mum then gathers them all up and they start walking down the road looking for water. We’ve had reports of ducks and ducklings walking down Oxford Street trying to make their way to the park. ”

She adds: “We sometimes get cats stuck behind walls. A few weeks ago the fire brigade had to drill a hole in the wall and I had to climb in bring the cat out.”

Things can get far more strange when unexpected critters turn up in unusual places. Jill recently came to the rescue of some frightened tourists from Kuwait who had booked into The Cumberland Hotel and discovered a snake in their luggage.

“It was a hognose. It wasn’t poisonous,” Jill says. “It went off to one of our rehoming centres.”

You never know what animal you’re going to deal with, she says, so when you start there is a lot of training including dealing with heights, swimming, health and safety and animal care. While she’s pretty good at dealing with most animals she admits she’s not a big fan of spiders.

“At the Royal Free Hospital recently, they had a tarantula in the bananas,” she says. “That was a bit nerve-wracking. Years ago when things used to go on planes the compression used to kill them all, but for some reason nowadays they seem to be surviving. He was well alive, he was. I’m not a lover of spiders.”

One of the most memorable experiences was a wallaby at Highgate cemetery. “It was hard, they’re a really sensitive animal. You have to get it in the dark, like throw a big blanket over it so they don’t panic. But we got it and that went to Heathrow quarantine. If you’re unsure, they have to go there for a few days to check they’re not carrying anything,” she says.

Jill admits it is hard to switch off when she’s not on call, adding: “When you go out and see something, you feel compelled to do something. I was out shopping with a neighbour and she said ‘look at those cones in the road’. Somebody had put loads of cones around a swan. So I said all right, pull over, I’ll go have a look. The canal was right next to it, he’d just taken a bit of a wrong turn, I got him down the steps, off he went and off we went.”

At home in Ealing, Jill has two African grey parrots called Tom and Jerry. “They’re lovely, they were both strays. When there was bird flu, everybody panicked and wanted to get rid of their parrots, though it was nothing to do with them really. But it’s not always a happy ending,” she says, “They call us the fluffy bunny brigade, but there’s more to it than that, not everything is going to survive. You can’t always save them, but whether the animal survives or not, it is nice knowing they’ve got somebody.”

But all in all, she says, it is very rewarding. Stressing the importance of microchipping, Jill says: “I always work Christmas, and once I found a cat, scanned it and took it to the lady’s house. I told her ‘I’ve got your cat in my van’ and she said ‘It’s been gone a year’. She said it was the best Christmas present she had ever had. You never have a boring day. They don’t want me to retire. I’ll do it for as long as I can, it is a very energetic job. But I just can’t bear leaving an animal.”