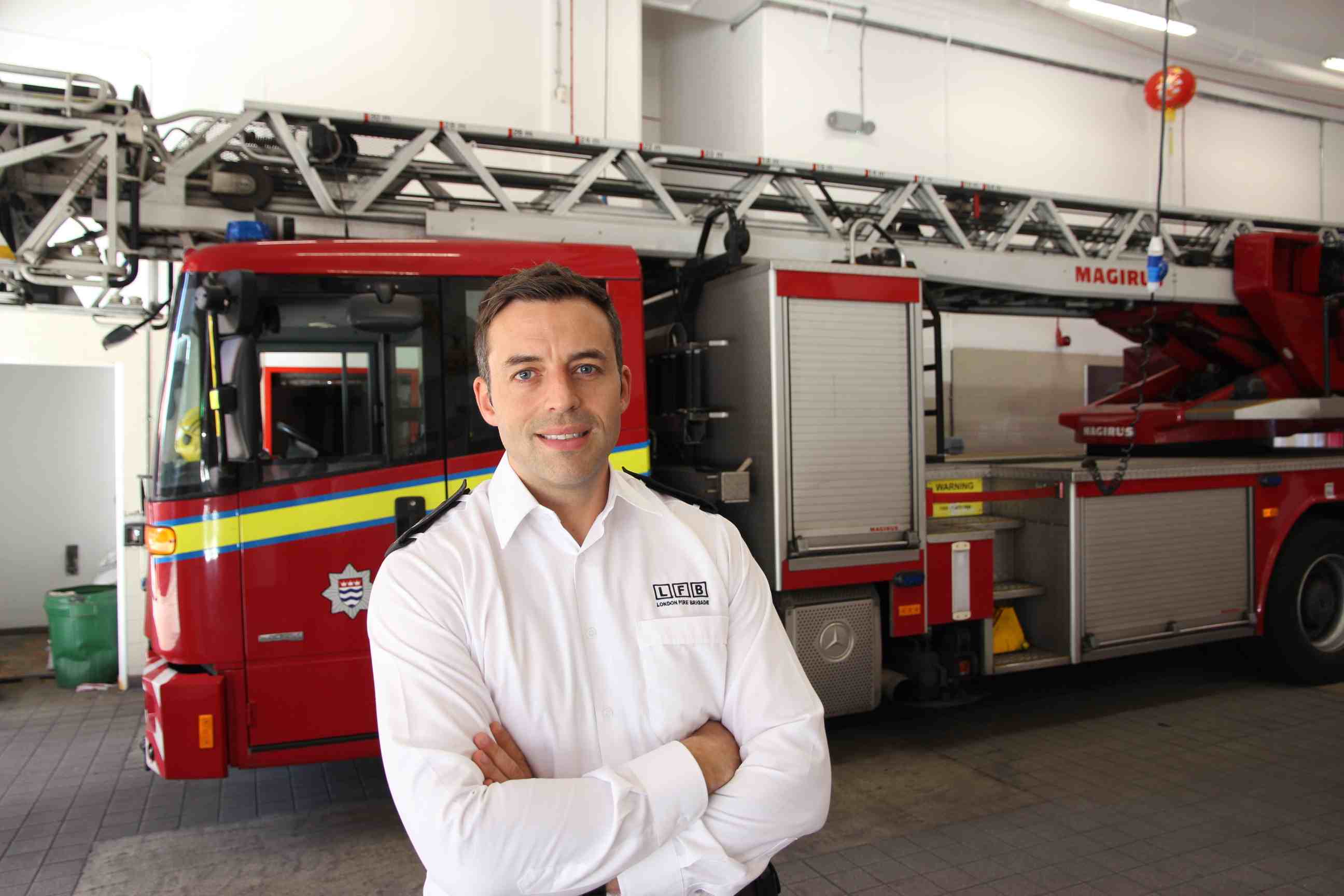 Aged just 36 and seated behind the wheel of a dark Jaguar saloon weaving through the traffic-clogged streets of Soho, it might not be clear at first glance that Rick Ogden is on his way to oversee the fire brigade’s response to a blaze raging on the Strand.

But Westminster’s new fire commander said he will not “hide away in public service and be a pen pusher”, having postponed an interview with Westminster Extra at the last minute to help tackle a fire that broke out in the basement of King’s College last month.

Far from hiding away, he vowed to be more accountable than ever to the public and promised to throw open the doors to the borough’s fire stations, which he describes as “community assets”.

“Traditionally in the past, fire stations have been seen as quite imposing buildings with big red doors that are shut and they only open when a fire engine crashes out on a call and that’s your only involvement you’d have with the fire brigade.

“I want a culture where people feel like they can knock on the door, or press the doorbell and come and show their kids around the fire engine, not just on open days, but on any day of the year.”

He has one important caveat to add to this open doors policy, however: “Not at 2am on a hen night.”

After three years leading Lambeth, Mr Ogden has taken over the reins in Westminster and is based in Shaftesbury Avenue. Having joined the London Fire Brigade in 2000, he made a rapid rise through the ranks and took his first position as a borough commander in Merton aged 30.

He has experienced some of the capital’s most traumatic moments first-hand throughout a 17-year career, including carrying victims from the wreckage of the 7/7 tube attacks, to tackling the fires that were lit by arsonists during the London riots.

Westminster presents “unique challenges,” he said, from the heritage of Buckingham Palace and Westminster Abbey to “some quite challenging demographics with housing and areas of deprivation” in the north of the borough and “the epicentre of the London night-time economy” in Soho.

The spectre of international terror looms large over Westminster, but for the firefighters based in Soho and Paddington, little changes regardless of the threat level.

Asked if, like their colleagues in the Met, they have to pull longer shifts at times of heightened alert, Mr Ogden said: “There’s no change to our staffing or our hours. It’s no different, because we train for that all the time. In somewhere like Westminster we are always doing that anyway, we are always preparing for the what-ifs.”

The London Fire Brigade’s funding has come under close scrutiny in recent years, with Westminster fire station in Greycoat Place closing in 2014 along with nine others as then Mayor Boris Johnson forced through budget cuts of £28million. Mr Ogden says he is “confident” they have what they need to do the job.

“If you look at Paddington, Euston and Soho, you have got five frontline appliances and a fire rescue unit to cover what is a very small area. It’s a very busy area but I think there is sufficient cover. It is quite well resourced in this immediate area.”

The “challenges” of Westminster and the high profile it brings make it a sought-after posting at all levels, he said.

“The boys and girls that work in Soho and at Paddington, 99 per cent will have to drive or cycle past 15 or 20 fire stations before they get to work. That speaks volumes. The transfer list to leave the borough is empty, but there’s a massive list to come into the borough.”

So how do you unwind from one of the most high-profile posts in the brigade?

“I’ve just done the Marathon des Sables, which was pretty brutal,” he said. “Five marathons in five days in the Sahara. I’ve literally only started walking in the past week. I’ve had a month of absolutely ruined feet, smashed to pieces.”