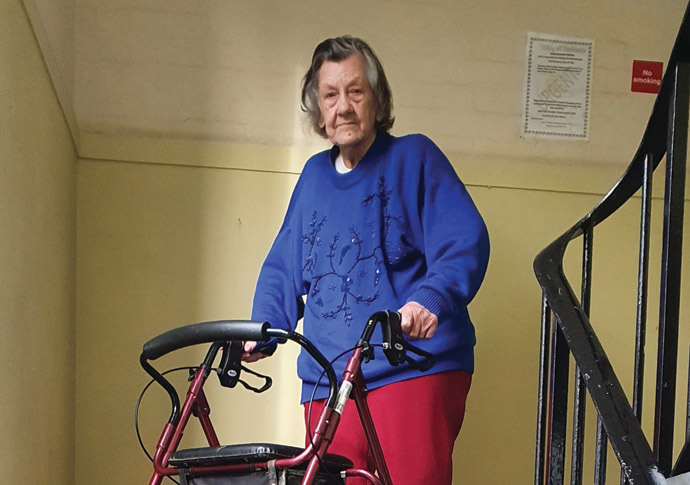 THE Town Hall apologised to a pensioner after a broken lift prevented her from getting the Covid-19 vaccine.

Margery Rowsell, 90, of Ashby House, near Essex Road, has been trapped in her flat for over eight weeks.

She was offered the vaccine last month but was unable to make it down the stairs to get to the Bingfield Primary Care Centre.

Ms Claybur added: “She is worried if there is a real emergency, if there was a fire – how would she be able to get out? These things play on her mind.”

Ms Rowsell uses a walker in her flat and needs a wheelchair outside after a fall two years ago.

She said she phoned the council several times since the lift broke in December. The maintenance team visited last Friday to fix the lift but when Ms Rowsell went to use it she still found it damaged. The council say they have since rectified the problem. And Islington has asked anybody struggling to get to their vaccine appointments to phone for support.

Housing chief Councillor Diarmaid Ward said he was very sorry for the distress and inconvenience caused to Mrs Rowsell and other Ashby House residents over the Christmas and New Year period.

He said: “Our teams work hard to maintain our estates and carry out repairs as fast as they can, but in this case the nature of the repair, and the seasonal disruption, meant it took longer than anyone would have liked.”

He added: “If anyone needs assistance to leave their home or help with transport to reach a vaccine centre, I urge them to call We Are Islington on 020 7527 8222.”