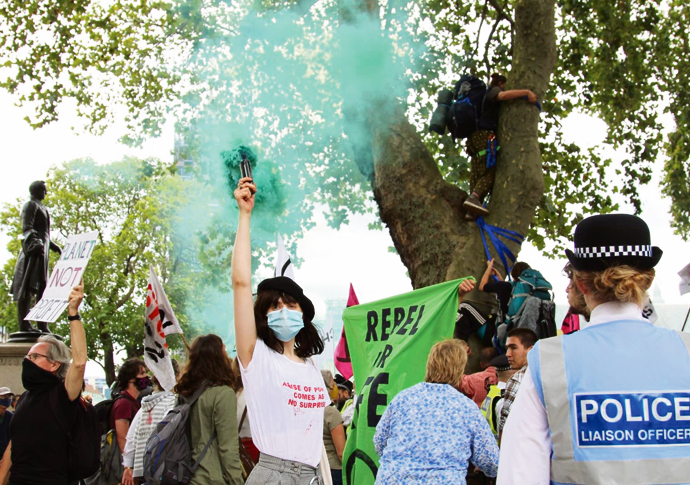 EXTINCTION Rebellion – XR – has returned to Westminster with a warning that politicians are failing to act on environmental pledges.

The group set up a camp in Parliament Square with some members gluing themselves to the cobbles outside the House of Lords yesterday (Thursday).

Others have chained themselves to a “bleeding tree” outside the Department for Environment, Food & Rural Affairs in Marsham Street.

More than 250 climate activists had been arrested as of last night after breaking police restrictions on the protest that is aiming to ensure the climate emergency is put back on the Whitehall agenda.

It was the start of a fortnight’s action similar to last year’s mass protests that shut large parts of the West End down for several days.

This year XR is also campaigning against the ­“ecological destruction” caused by the £106billion High Speed 2 rail project linking Euston and Birmingham.

Sam Smithson of HS2 Rebellion, a broad alliance of environmental and anti-HS2 campaign groups, said: “We don’t have time for this mistake when all our lives depend on it. These actions today hope to deliver a symbolic reality check to the people we have entrusted with all our lives.” 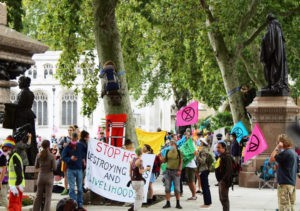 Several protesters broke through police cordons to sit down on roads and halt traffic. Arrests stood at 232 during the day on Thursday, after 72 people were detained on Wednesday when demonstrators tried to block Boris Johnson from attending Prime Minister’s Questions by lying in the road.

The “bleeding tree” was delivered to DEFRA as the Climate and Ecological Emergency (CEE) Bill was presented to parliament by Green Party MP Caroline Lucas.

The Private Member’s Bill, compiled by a number of scientists, lawyers and activists, outlines a plan to deal with the UK’s emissions in an attempt to avoid a critical global rise in temperature.

Rob Callender, one of the pair locked onto the “bleeding tree”, said: “It is just another disgraceful attempt to justify the stripping of autonomy from communities, indigenous and marginalised peoples, while sterilising their sacred cathedrals of nature in the process, for a short-term, short-sighted, gain for the present ruling minority.”

Police have been attempting to control the movements of protesters in and around the city this week, by imposing conditions under section 14 (3) Public Order Act (1986), stating they believe the protests will cause serious disruption to the life of the community.

The conditions are that assembly can only take place in the off-road area named as Parliament Square Gardens and that “no boat, vehicle, trailer” may form part of the procession.

Last year a large boat was fixed to the floor in Oxford Circus – one of the busiest junctions in the country – and stayed there for nine days.

Police have been accused of trying to impede the rights of people to take part in peaceful public protests.

But Commander Jane Connors said: “We have decided to impose conditions under section 12 and section 14 of the Public Order Act (1986) on protesters looking to assemble and those looking to go on a procession. The reason we have implemented these conditions is that we know these protests may result in serious disruption to local businesses, commuters, and our communities and residents, which I will not tolerate.”