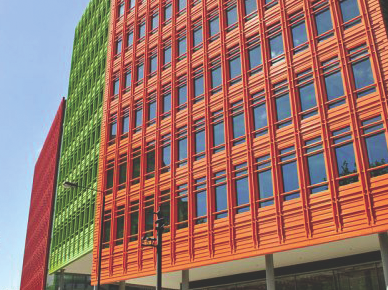 A HOUSING association has been asked to freeze rents and service charges at a block in Covent Garden after a series of boiler and water system breakdowns which at one stage left residents being advis­ed not to flush their toilets.

Senior figures from Clarion appeared before a cross-party panel of councillors on Thursday amid ongoing complaints about life in Matilda Apartments – a block built eight years ago as part of the high-profile Renzo Piano regeneration of St Giles High Street.

The questioning at Camden’s housing scrutiny committee followed a deputation led by Azeem Ahmad, on behalf of fed-up residents who, he said, had “grave concerns” about the building.

“Two years ago we had no water in the entire building for six days,” he said. “There was a standpipe in the street for us to get water from. It took that long to actually get a conversation to resolve the issue. We were told not to flush our toilets and that’s in summer.”

Mr Ahmad, a pharmacist, said in 2018 alone there had been “six incidents of extended loss of hot water and heating”, adding that residents felt “disempowered and hopeless”. Even apparently minor issues such as a number for the front of the building – so that delivery staff could find homes – took too long, he said.

A new £650 service fee had recently been levied on top of an annual service charge demand of around £2,400. “We request a freeze on any rent increase until Clarion have provided a clear 12 months without a major incident due to the building’s infrastructure such as prolonged loss of heating and hot water,” Mr Ahmad told the committee.

Clarion merged the Circle housing association in 2016. Its directors believe there has been an improvement for residents since that deal was signed.

He told the committee that it was a building with “challenges” and, to the surprise of some councillors, that the housing association was open to a new organisation taking over.

“We would like to think we were the best option for owning and managing it as a housing association, but ultimately if we are not delivering that service and we can’t convince the residents, we’d be happy for another housing association to take that on if they wanted to,” he said. “We are not precious about this.”

Asked if the job was too difficult for Clarion, he added: “No, we are putting everything we can into this. We believe we are well placed to deliver it. “All I’m saying is that it is the residents’ views that come first and if the residents feel that’s not the case after what will be two-and-a-half years, then we are perfectly happy to enter into that discussion.”

In a sharp exchange on Thursday evening, Vicky Bonner, director of housing at Clarion, was repeatedly asked by Labour councillor Marcus Boyland how she personally would feel about getting a new service charge demand for £650 on top of a fee of around £2,400.

She said: “I have to say I don’t know enough about that level of detail but I’m happy to go away and find out. I don’t actually know that.”

Cllr Boyland replied: “Do you think it is reasonable, just off the top of your head, right now?” Ms Bonner: “It’s St Giles that levy the services charges to us, and we will levy them on the residents. That’s one of the issues with these complicated schemes where there is a block and then the people who own it. One of the difficulties is the planning and all the extra kit that you have to put in, and that all comes with huge cost to be honest.”

Cllr Boyland: “And if that bill came through your door, would you pay that?”

Ms Bonner: “I don’t feel that’s for me to answer.”

Cllr Boyland: “Well, I don’t know, do you think it’s reasonable or not: £650 in addition to what they are already paying?”

Ms Bonner: “I suppose it would depend on what it was being paid for.”

Cllr Boyland: “Given the service they are getting?”

After five seconds of silence, committee chairman Douglas Beattie asked Cllr Boyland whether he was happy with the answer. He replied: “Well, I’m not but it’s one of those…”