Hundreds back campaign to save block on historic estate

Proposed scheme ‘does not offer any additional council housing’ 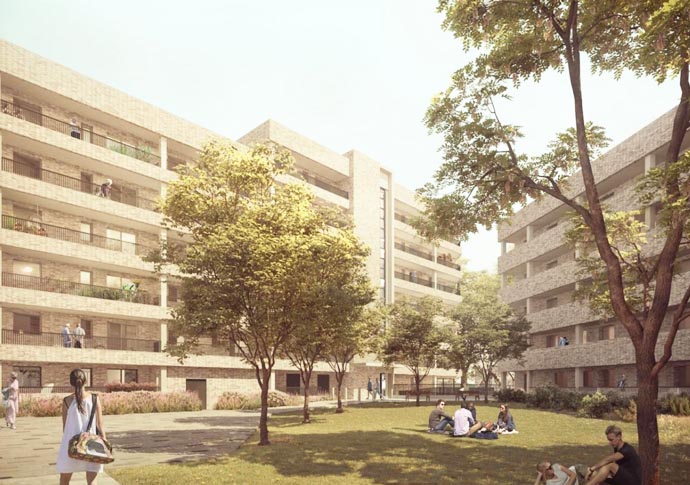 HUNDREDS of people have signed a petition against a plan to demolish a council-owned housing block on a historic estate.

Westminster City Hall wants to demolish Darwin House and the derelict Balmoral Castle pub to build 52 homes in a seven-storey building – but none will be for council tenants.

They are calling for a delay in the process saying the consultation has “discriminated against a significant number of our residents who have been excluded” because of the Covid-19 coronavirus.

Robert Eagleton, who set up the PCG group, told Extra: “We believe that all new housing should be social housing. Given that thousands of families are on the waiting list, it is inappropriate for the council to be proposing to dedicate homes to intermediate rent.”

Intermediate rent is for those who do not qualify for social housing but may struggle to buy or rent privately.

Mr Eagleton said residents in neighbouring Maitland House and Shelley House blocks would be worst affected by loss of light and the noise from construction.

Liza Begum, a resident who is Labour’s candidate for the Churchill Gardens ward in an upcoming by-election, said: “I am in support of Darwin House residents having new homes, but the scheme does not offer any additional council housing, which should be made a priority in any redevelopment especially since Westminster has over 4,000 people on their housing list.

“The sensible step would be to delay any decision. Under the pandemic we cannot guarantee that all residents can engage in a thorough and meaningful consultation, especially elderly residents that have found themselves digitally excluded under lockdown, according to one response to the planning application.”

Darwin House is on the site of the former 19th-century All Saints Church, Chapel of Ease, which was demolished in 1975.

An online petition on Change.Org, signed by 500 people, said the rebuild at Darwin House would mean “only those who can afford it will now have a river view”.

But residents in the block say they are “100 per cent in favour of this regeneration project”, according to a response to the consultation.

Residents are looking forward to moving out of a decaying 1980s building and into modern, new-build, flats.

The Churchill Gardens Residents’ Assoc­iation said the new block would not blend in with the conservation area, adding: “While not calling for a complete pastiche design we are deeply disappointed that no consideration to the design of our multi-award winning estate has been considered.”

It also raised concerns about access to St Gabriel’s Primary School, adding: “We also wish to record our deep disappointment that a building of historic interest [The Balmoral Castle] was allowed to fall into such disrepair.”

Other objections warned of “a significant loss of natural light” in surrounding buildings and about the demolition of the former Balmoral public house.

“To demolish this pub would be to lose not only a fine Victorian building, a sense of the former street plan and of ‘old London,’” one objection said.

The scheme’s planning statement said: “The development has been carefully designed to optimise the density of development, while ensuring that the design respects the character of the surrounding area, specifically the Churchill Gardens Estate Conservation Area.”

It added: “The proposal has been developed in consultation with the community, officers of Westminster Council and key stakeholders as part of pre-application discussions.”

Debbie Jackson, the council’s director for planning and housing, said: “Our proposals bring 52 new, high quality and much needed affordable homes into the heart of Westminster.

“These include specialist homes for older people at social rent that will give existing residents of Darwin House far more spacious, modern and energy efficient homes than at present and intermediate homes for those on household incomes from £32,000 to £60,000 who may be unable to afford market rents but do not qualify for social housing. As part of delivering benefits for the local community, the new intermediate homes will be offered first to residents in the local area.

“Designs have been considered carefully to complement the existing, highly regarded estate architecture, enhance green space available and to meet sustainability standards to reduce the carbon footprint of the buildings through measures such as triple glazing, solar panels and air-sourced heat pumps.”