King’s Cross: all gas and gutters

We all know the redevelopment of King’s Cross has rendered it unrecognisable. Thankfully, says Dan Carrier, a new book of photographs has brought its gloriously seedy past back to life 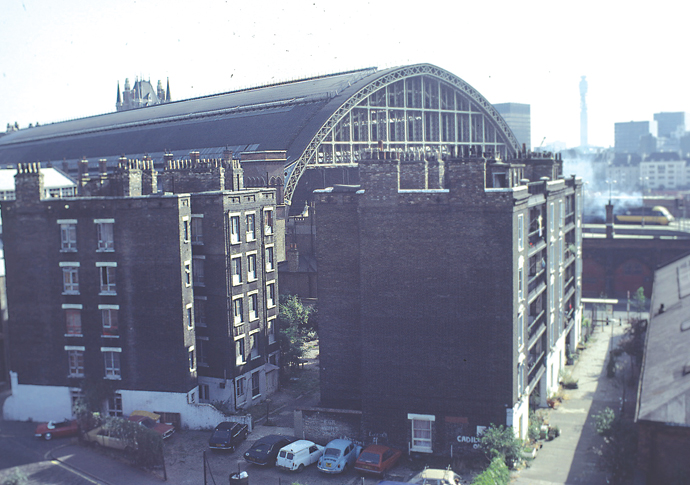 The Stanley Buildings in King’s Cross. All photos: Nick Bradfield and Jim Conboy

THE Stanley Buildings in King’s Cross were originally built for the Victorian railway workers, who provided the man power for the area’s bustling industry.

But by the 1970s, the tenement blocks had been bought up by Camden Council, and handed over to a community housing association originally founded by a group of students.

Nick Bradfield and his friend Jim Conboy lived in the blocks – of which only one still survives – from 1976 onwards, and the keen photographers spent their evenings capturing the extraordinary historic landscape that reflected the area’s past.

Now, 40 years later, Nick and Jim have gone back over their work and produced a new book that reveals a world of King’s Cross now long consumed by redevelopment.

Nick was studying urban planning at the Central London Polytechnic in Marylebone Road and living in a rundown shared house in Delancey Street, Camden Town.

“It was a good place to live in terms of location – but it was completely derelict,” he recalls.

In 1976, he – along with the New Journal’s head of distribution, Don Ryan, who also lived in Delancey Street – heard about the Stanley Buildings and decided to see if they could move there.

It would provide Nick with a home until 1985.

“Don said: There’s a building in King’s Cross with rooms,” he said.

“I walked down and had a look at it.

“I remember it felt quite intimidating – there were no street lights and heavy curtains on the windows. It was a big tenement block.”

In the 1970s, the Stanley Buildings had passed on to a housing association but the flats were left empty, as they were not suitable for families.

The King’s Cross gasholders, pictured here in 1981, have now been turned into luxury homes

The Town Hall allowed a group of students to form the SCH – Short-life Community Housing – and they took on the buildings that were deemed to expensive to refurbish.

“There were streets and streets of homes covered in tin metal hoardings throughout the borough. I remember when I first moved in, I had to put a lock on the door, and you could hear the platform announcements from King’s Cross station.”

The tenants – predominantly young people – lived with the threat of eviction hanging over them and were only given short leases.

“We knew we could be the last people living there,” says Nick. “It was always that possibility, but it went on for 20 years.”

Nick paid £7 a week and a rent collector came round each Friday to collect the money and sign their rent cards.

The flats were in a poor state but well loved, he remembers. “We didn’t have any central heating, just one gas fire in the main living room. The toilets were out the back in an extension. When you got up in the middle of the night you had to brave a freezing cold box. And the flats were unique – many had been knocked into two, so the rooms were oddly shaped.”

Nick was fascinated by the neighbourhood, and explored the streets and buildings.

“I was aiming to capture the grittiness of the area,” he says. “One of the advantages of the Stanley Buildings was you could get on to the roof and take pictures. You could just walk up a spiral staircase there – it wasn’t locked.

“Most of the photographs were not taken in bright sunlight, and many were shot at night. I would go out with my tripod, set up and take shots.”

Nick had grown interested in photography partly through his studies.

“I never had any training as a photographer but I was a member of photography groups and took pictures for my degree course. I developed my shots at the poly’s dark room. I used to take pictures and then stick them on my bedroom wall with Blu-Tack.”

As a student and living on a low income, he had to make each shot count.

“I had no money, and it cost a fortune to get them printed in colour, so I often went for black and white due to necessity.”

The area’s seedy reputation was well established by the time Nick lived there.

“You would come home from college in the evening and be propositioned by people working as prostitutes. There was no Bagleys or anything like that back then, just the Covent Garden Supply Company. It could feel empty at night. The Coal Drops were locked up and mainly used for storage.

“There wasn’t much industry left in the immediate area by this point.”

While his photographs capture a unique moment in the history of King’s Cross, he knew, as an urban planning student, that it would not be conceivable that the Victorian buildings could all be saved or restored in a piecemeal fashion. One of the three Stanley Building blocks remain today, the others demolished as the area was redeveloped.

“We were all aware something was going to happen to the area as a whole, and nothing could happen without a really comprehensive plan for the whole area. It was just too important nationally, too strategic a location and too big to do in a piecemeal way. The fact it was done comprehensively was inevitable.

“People ask me how does it compare to King’s Cross today, but that is impossible to do. It is a completely different place. We were fortunate to have been there at the right time to create a unique record of an urban landscape, now lost forever – and we miss it every time we visit.”

What’s the point in recycling?
From the Camden New Journal

This is not a car park?
From the Camden New Journal

When you build a bike lane, use will follow