The Covid pandemic has threatened many gig venues, but sadly their closure is nothing new, as a timely book illustrates 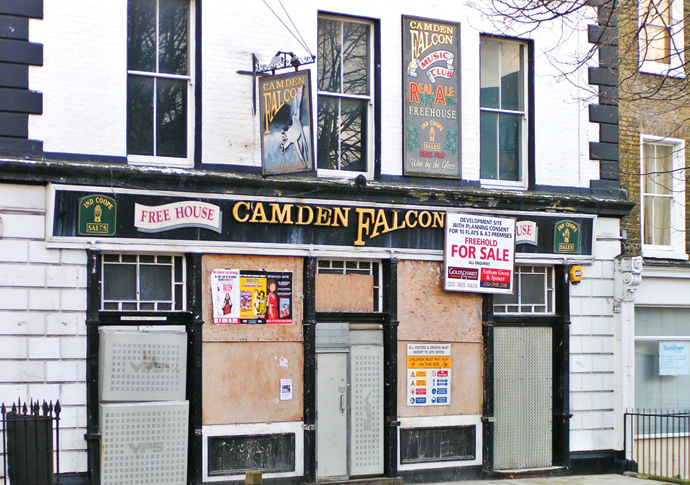 FROM rotten stages and through ancient PAs, the basement dives and rooms above Victorian pubs have all played key roles in the development of popular music over the decades.

And despite such dens being the starting points for global cultural movements, their heritage has all too often not been enough to keep them going.

Author and photographer Paul Talling’s latest book, London’s Lost Music Venues, takes the reader on a voyage across the capital to find out whatever happened to places that spawned movements from jazz to skiffle, punk to indie, acid house to pub rock.

Paul set up a website, Derelict London, 17 years ago and it offers a portrait of a city that is ever changing.

His camera has captured the effect of time on our environment, and he is a highly original social historian.

His new work is a poignant reminder, particularly today as so many important venues are under threat.

Split into geographical areas, he has found some still standing, though in different guises, while others have disappeared.

“I haven’t done a social analysis of the scenes, but more an observation of how many live music venues have disappeared and to answer the often-asked question of what do those venues look like these days,” he writes in the introduction. 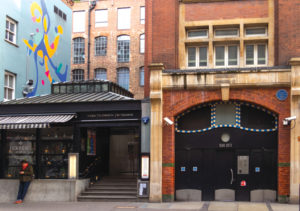 The Marquee Club in Wardour Street

He has covered 130 venues – and more are to come in a second volume as he had no room for bigger venues, such as the Astoria.

“There was The Castle in Kentish Town, which became the Verge, the Bullet Bar and then The Flower Pot,” he recalls. “Its list of alumni is impressive, ranging from Florence and the Machine, The Vaccines’ debut gig and also Carl Barat of The Libertines.”

Bought by an estate agent, they applied to knock the venue down, with listed features threatened. It lay empty for years, until the owner was made to restore the building – albeit as an office and housing.

He also includes the Tally-Ho, further north in Highgate Road – and has hunted down a picture of the publican Lillian Delaney, who sang in bands and produced two Live At the Tally Ho albums.

He adds that The Tally Ho was known for giving the world pub rock, with the likes of Dr Feelgood and Ian Dury’s Kilburn and The High Roads appearing. After closure, to was replaced by a block of flats – called The Tally Ho apartments. 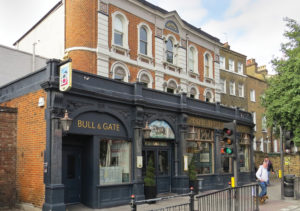 The Bull and Gate in Kentish Town

Across the road, he considers the Bull and Gate. It was closed as a venue by Young’s the Brewer, who recently shut The Constitution in Camden Town.

“That was a great venue,” he says. “I can’t begin to recall how many bands I saw there. There was the trick that you bought a pint in the bar and then instead of going out again and in through the venue entrance, you could slip in through the gents’ loos.”

How venues become associated with key trends in music history shines through: “I wanted to go back to the 50s so we could see the places skiffle, jazz and folk were played,” he adds.

One such venue is Litchfield Street’s Bunjies Coffee House and Folk Cellar, Covent Garden. It opened in 1954, and was named after a pet hamster.

Paul Simon – who lived for a time a few doors away – played there, as did Bob Dylan.

“In 1962, Dylan dropped into Bunjies, paid an entrance fee and sang a couple of songs but then got shown the door after insisting on playing more – you had to be a headliner to play for longer,” writes Paul.

Cat Stevens had a job as dish washer and occasionally got on the stage, while in later years Jarvis Cocker was a regular.

He takes us through the 60s psychedelia movement via Middle Earth in King Street, where “the stoned crowd would leave at dawn, initially to the amusement of the Covent Garden market porters, until a rumour circulated that a child was being burnt at the stake in the club,” writes Paul. 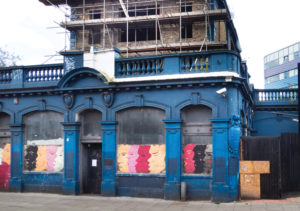 “Porters stormed in with axes and box hooks, destroying almost everything. After raids by the police the club closed in 1968 and some Middle Earth nights were then held at the much larger Roundhouse in Chalk Farm.”

The Sir George Robey dated from the 1870s and was originally called the Clarence. It was renamed in the 1960s after the famous music hall performer.

“It was the venue for any up-and-coming band with a Ford Transit on the ‘toilet circuit’ up and down the country,” he says.

“In 1989 I hosted a punk all-weekender that was so busy the police had to stop the crowd spilling out into traffic on the Seven Sisters Road,” he adds.

“Everybody seemed to have a love/hate relationship with the place, especially the appalling toilets. It attracted great bands, but it was also none too salubrious. I remember watching the singer TV Smith slipping over someone’s vomit onstage. The venue staged all-nighters by Club Dog which had a squat and free party vibe with its psychedelic bands crossing over with the rave scene.”

He recognises the huge threat venues are under. Before the pandemic struck, London’s venues were facing extraordinary challenges. Pressure from breweries, soaring rents, property prices, licensing issues all created a perfect storm. Then came lockdown and social distancing – a recipe for financial disaster for an industry that relies on creating a busy, sweaty atmosphere.

Despite the loss of such places to nurture musical talents – or persuade others not to quit the day job after all – Paul says there is a possible silver lining.

“Venues need all the help and support they can get,” he says. “But you have to try to be optimistic. When places fall vacant, you get things like squat gigs come in and that can help new scenes and creativity emerge. People will always want to go out, and always want to hear music. Musicians and bands will always want to play.”