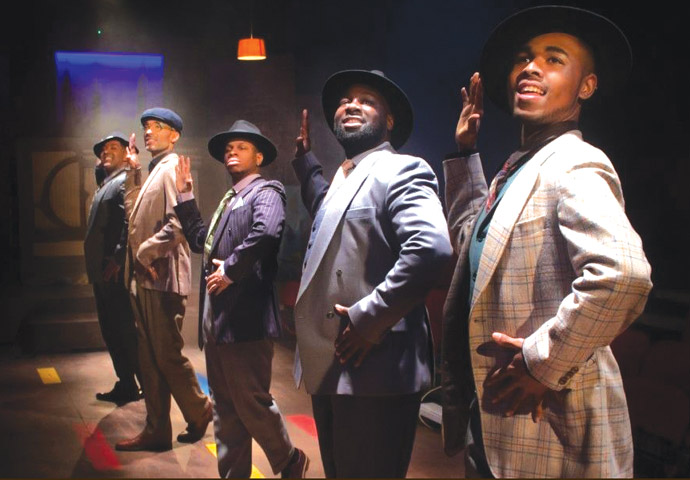 Inspired by a true story, Nell Leyshon’s Folk is Downstairs at Hampstead Theatre until February 5. Set in Somerset in 1903, Louie Hooper’s mind overflows with songs – more than 300 of them passed down from her mother. Cecil Sharp, a composer visiting from London, fears England’s folk songs will be lost forever and sets out on a mission to transcribe each and every one. He believes Louie’s music should speak for the whole of England. hampsteadtheatre.com

Blanche McIntyre production of Shakespeare’s Measure for Measure is at the Sam Wanamaker Theatre from January 4-15. It’s 1975. Britain is on a knife-edge. Increasing inflation, surging unemployment, an energy catastrophe, identity crisis and persistent political scandal. In London, the Duke abandons the unravelling city, leaving authoritarian Angelo in power. When he starts policing sexual freedom, Isabella is drawn from the safe space of her convent to rescue her brother from death under the new laws. But his freedom comes at a price. shakespearesglobe.com

Join ShakeItUp Theatre for an evening of improvised Bard-based Bedlam at the Hen and Chickens, 7.30pm on January 3. Using Shakespearean language, audience suggestions and the performers’ overactive imaginations, they create a Shakespeare play live on stage. The Improverts and their improv comedy show are returning to the pub venue January 6-9 at 9.30pm £8.50. unrestrictedview.co.uk

A dark and thrilling musical of masochism and murder, Thrill Me: The Leopold & Loeb Story (book, music and lyrics by Stephen Dolginoff) is at Jermyn Street Theatre from January 13-February 5. Set in Chicago in 1924, Richard Loeb is obsessed with crime. Nathan Leopold is obsessed with Richard. High on adrenaline, they leave a trail of arson, theft, and vandalism in their wake. But Richard wants to take a step further – a step that will test Nathan’s loyalty to the limit. Can they commit the ultimate crime: a perfect murder? jermynstreettheatre.co.uk

David Suchet – Poirot and More, A Retrospective will be at the Harold Pinter Theatre from January 4-24. Join the conversation with the actor and his many roles in a unique look at David’s career. For over 25 years he’s captivated millions worldwide as Poirot, Agatha Christie’s elegant Belgian detective. Suchet has also been celebrated for his portrayal of many other iconic roles on stage and screen. haroldpintertheatre.co.uk

Don’t miss Five Guys Named Moe, Upstairs at the Gatehouse until January 16. There’ll be two socially distanced performances on January 4 at 3pm & 7.30pm, when capacity will be limited to 50 per cent. Nomax is broke, his girlfriend’s left him, and he’s listening to the radio at five in the morning. Out of the radio step five guys named Moe. Singing and dancing to Louis Jordan’s jazz-laced rhythm and blues score, they encourage Nomax to turn his life around, get his girl back, and encourage all of us to “let the good times roll”. upstairsatthegatehouse.com