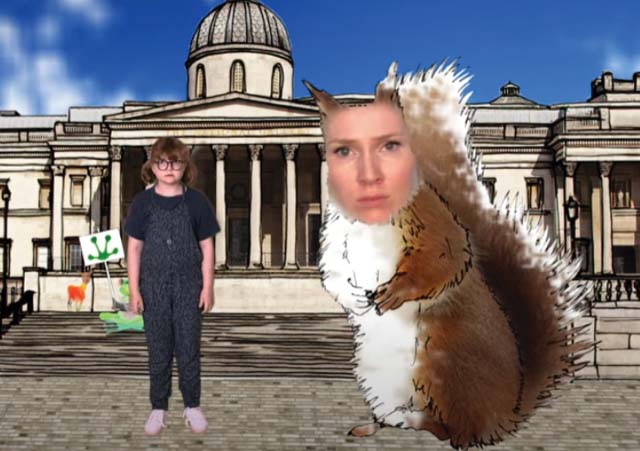 MAYBE you have enough to cry about in these grim times, but just in case you don’t, you should know about an exquisite little opera by Ravel that always has me reaching for the Kleenex in the last scene – not because it’s tragic but because it’s so profoundly beautiful and heart-warming.

The piece is L’Enfant et les Sortilèges, which translates as The Infant and the Spells, and it’s a fairy tale about an objectionable child who destroys books and tortures animals – until they take revenge and make him change his ways.

The magic in the score, which calls for dancing tea cups, singing squirrels and the like, is hard to stage, but it’s a perfect thing for digital production. And I guarantee you’ll be enchanted by a new virtual show put together in Covid conditions with all 130 performers filmed around the world in isolation. Using green-screen technology, the faces of the cast are superimposed on cartoon images.

The whole thing is a joy. And you can see it, free, on the London Philharmonic Orchestra’s YouTube site until mid-December: perfect feelgood entertainment for a winter’s evening.

But this year, thanks to Covid, it’s been a different story, with the performers all too available and no audience allowed – which is how it was last week for the Royal Philharmonic Society Awards, generally acknowledged as the most significant in the classical world.

They took place at Wigmore Hall, with a disturbing silence rather than the cheers that usually follow the announce­ments, and a dearth of party frocks (mine hasn’t left the cupboard in a long time).

But on the positive side, this year’s event is available to everyone, because it was staged for home viewing and you can watch the whole thing – laughter, tears and words of wisdom – without charge at www.royalphilharmonicsociety.org.uk

Among the winners picking up their trophies (which look curiously like pickle forks but count for something) you’ll see cellist Sheku Kanneh-Mason collect an award for being young and brilliant; conductor Jane Glover get one for her trailblazing work with a baton in times when women didn’t do that sort of thing; and Stephen Hough get another for his entertaining book of essays, Rough Ideas, which covers everything from the serious matter of concert nerves to the frivolous one of gay pianists: can you tell?

And if you’re inspired to look further, check out the spine-chilling production of Britten’s Turn of the Screw, which won the Opera award and can still be seen (with introductory materials and talks) for free on Garsington Opera’s YouTube site. A great show.