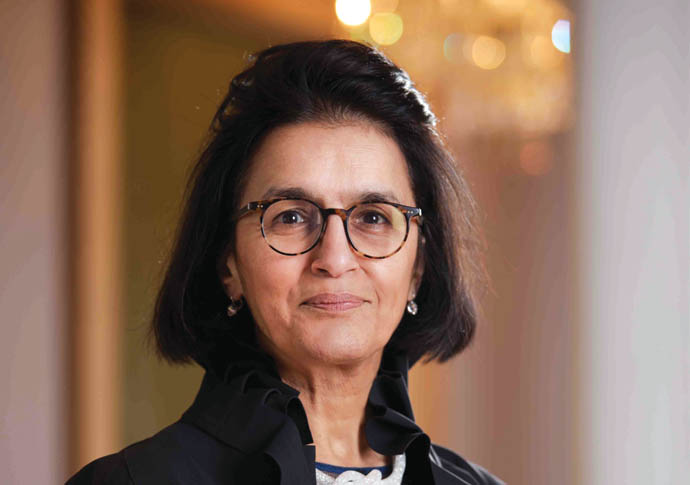 Wasfi Kani, who has been awarded a CBE

AS the music world has been among the hardest hit of all professions during 2020, it was good to see it properly acknowledged in the New Year Honours list – with a knighthood for opera director Graham Vick, a damehood for conductor Jane Glover, and assorted gongs for pianist Barry Douglas, cellist Natalie Clein and composer Julian Anderson. All thoroughly deserved.

But one I’m particularly pleased about is the CBE for Kentish Town’s own Wasfi Kani: a formidable woman with the energy of a volcano in eruption, whose achievements can’t be contained in a single word. All I can say is she makes things happen. With a vengeance.

Starting out as a conductor, she created her own Pimlico Opera company which went into prisons and got hardened villains singing Mozart – against all odds and in a way that sometimes turned their lives around.

From there she became chief executive of Garsington Opera. Then she set up Grange Park Opera, building a new theatre in the process. Then she joined forces with the Carphone Warehouse boss David Ross to create Nevill Holt Opera. And then she re-created Grange Park Opera on a new site, building yet another theatre. From scratch. In less than a year.

I often think she should be running the country (Covid would surrender instantly). And at the very least she should be running English National Opera, which has had no effective leadership for a long while, was falling apart even before the pandemic, and is going to need radical rescue pretty soon. Only problem: I don’t think she’d want the job.

What triggered the CBE, though, was her emergence among the musical heroes of 2020, refusing to despair and turning the Grange Park website into a dazzling resource that didn’t just show films of old productions but generated masses of new work, designed for online viewing and freely accessible. If you haven’t seen this website, you’ve missed something – though much of it is still there at www.grangeparkopera.co.uk offering hours of quirkily informative delight to anybody interested in voices. A must-see.

• Meanwhile, the free online productions from the Vienna State Opera continue with the next instalment of its Ring cycle, Siegfried, on December 10: www.wiener-staatsoper.at. And on the New York Met website next week is a celebration of Renee Fleming, the pre-eminent American soprano of the past 30 years, now effectively retired from the stage though still a glamorous and charismatic figure.

• The Met are screening some of her finest performances, with a Figaro December 11, Thais December 12, Rosenkavalier December 13, and Rossini’s Armida December 14. All on demand, and free, so you can watch at almost any time of the day. Details: www.metopera.org

• Finally, a call to young composers aged 14 to 18. The Guildhall School of Music is running an online course with one-to-one tuition, group workshops, and the opportunity for performance by GSMD staff and students. It’s not free, there are fees. But it’s a serious opportunity for serious candidates. And the deadline for application is December 12. Details: www.gsmd.ac.uk/youth_adult_learning