Neighbours' plea to Town Hall: ‘Save us from zombie invasion' 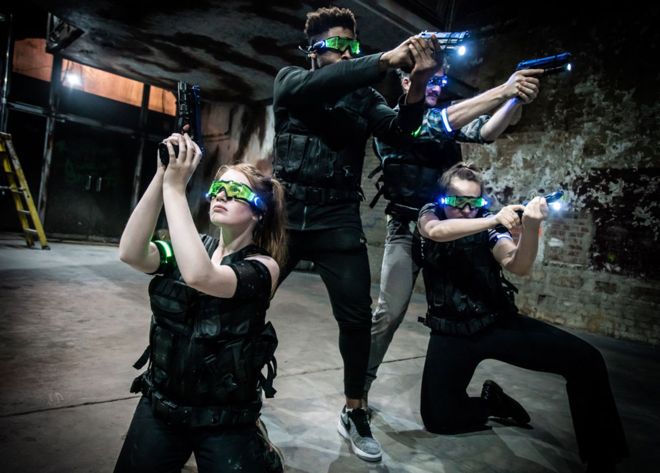 Variant 31 is proving a hit with thrillseekers

NEIGHBOURS fearing a drunken zombie invasion around their homes have appealed to the council to save them.

One of the country’s best-known lawyers is among the opponents to “survival game” ­Variant 31, which is being run by an immersive theatre company in a rundown parade in Bloomsbury.

The adults-only experience has attracted thrill-seekers who pay to tackle “zombies” brought back to life by a reckless inventor of a mysterious serum.

It has yet to secure an alcohol licence and planning consent, however, and people living close to the site in New Oxford Street say the horror show must be stopped.

Human rights barrister Geoffrey Robertson QC, who lives nearby, is among objectors who have written to the Town Hall urging councillors to prevent “serious adverse consequences for residents”.

He said the building had been mocked up as a “serum dispensary” and played on the idea of being intoxicated, adding that guests would “predictably stay around after the bar closes and eventually wander up towards the lights of the British Museum with the commotion and misbehaviour common to groups inebriated by drink.”

Mr Robertson’s daughter Georgie Robertson was elected as a Labour councillor in Camden last year but has no role in the licensing decision.

He said he could have to spend £9,000 on double glazing to eliminate noise, telling licensers: “There is a danger to our health, not only from too little sleep but the fury that comes from having to put up with this kind of noise outside our very windows.”

The lawyer added: “This is not a theatre and the ‘zombie experience’ is not actually appropriate to Bloomsbury with its more humane and intellectual reputation.”

While Variant 31 has generated much anticipation among fans of the growing new immersive experiences industry due to its billing as one of the most chilling operations of its kind, some objectors living close by say the zombie theme will not help an area already suffering from drug addicts consuming in the street. Further objections came from residents in the streets around the venue and the South Bloomsbury Tenants and Residents Association.

Another objector said the opening hours, closing at midnight, would “not prevent a continuous run of alcoholic hostile aggressive shouting that will either wake us up or keep us up most of the night”, adding: “We have experienced this in the past even though our bedroom has double glazing. Our street has been used as a public urinal and toilet and the constant smell of urine and defecation outside our building is particularly offensive. “The constant outpouring of zombie patrons will only exacerbate this problem.”

Big Dreamer Productions who run Variant 31 say they are revitalising buildings that had been left vacant. It has pledged to act to ensure residents are not disturbed by its operation. “The proposal would make efficient use of these vacant buildings for a temporary period of up to five years and make a positive contribution to the cultural identity of the area and the local economy,” its statement to the council said.

It added noise would be limited to people arriving and departing but that exits of groups would be staggered and that there are good transport links in the area to take customers away. Twenty-four-hour security with “20-30 uniformed staff” would be in place to stop any nuisance behaviour, the company said.

The company said it would “not cause unacceptable levels of noise through on-site activities or comings and goings from customers and the residential amenity of surrounding neighbours would be protected.” A licensing panel will meet later this month, while the planning department is reviewing a retrospective application.