Hundreds of West End pubs, bars and restaurants are set to reopen on April 12 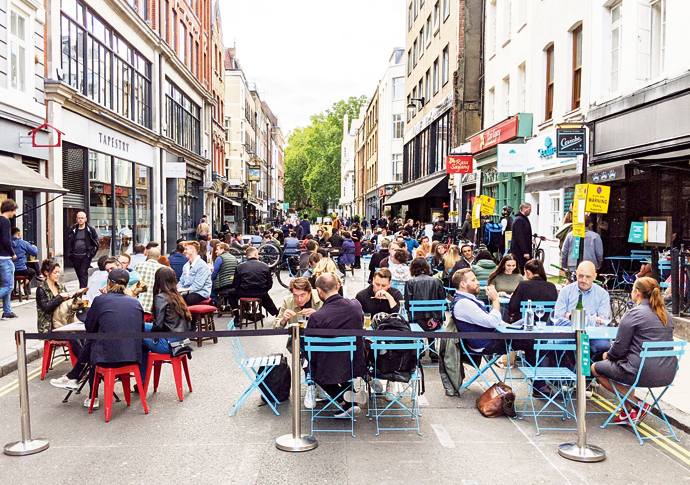 Some 560 premises gained pavement licences to benefit from outdoor dining

Designs will be drawn up and consulted on “when the city recovers” from the pandemic, Westminster Council said this week.

Hundreds of pubs, bars and restaurants are set to reopen on April 12 in a repeat of last year’s scheme that introduced road closures in 60 streets.

Meanwhile the Greater London Authority has applied to license jumbo screen and alcohol events in Trafalgar Square for the European Cup. England will play their first match at Wembley on June 22 in the postponed 2020 football tournament – the day after all Covid restrictions will be lifted, according to the government’s roadmap.

But there have been warnings from public health chiefs to summer fun-seekers not to get carried away, not to forget to wash hands, and to get the life-saving vaccine.

“The council will consider the possibility of what a longer-term al fresco provision could look like… and will be consulting with communities as and when designs are created and as the city recovers,” a council statement said.

The city council says 560 premises have been issued with pavement licences and have been able to benefit from outdoor dining and 60 streets were transformed with temporary road closures and pavement-widening to make space for outdoor restaurant seating in the street.

Many residents in Soho strongly criticised the scheme last year, saying it was not being properly regulated and little was being done to enforce social distancing regulations.

Last summer the Rector of St Anne’s church in Soho, Simon Buckley, said: “The al fresco dining proposal was a good idea that many residents in Soho supported. But we were led to believe that the council would manage, supervise and regulate it.

“There’s been little evidence of that from what I and others have seen.”

And this week there was a Covid-19 warning from Professor Kevin Fenton, London regional director for Public Health England.

He said: “The virus is still here in our city and we mustn’t lose sight of all the important public health measures we have adopted over the past year.”

Westminster Council’s leader Rachael Robathan said: “The majority of our residents have supported these schemes in the past and we hope they will understand the need to continue the temporary measures until the end of September.”