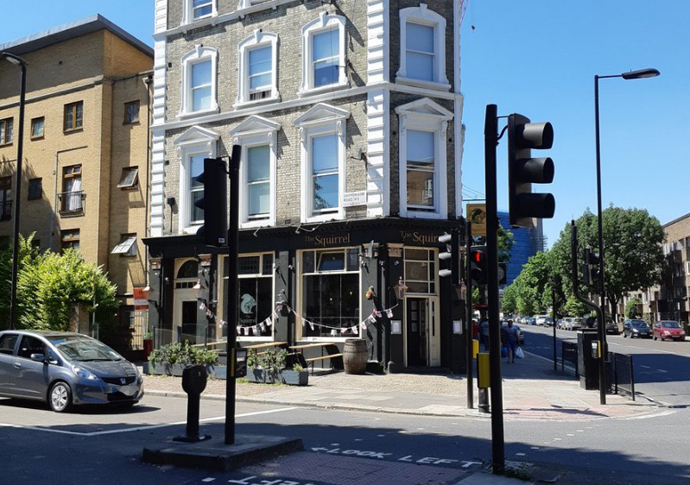 PUB campaigners are gearing up to take on the brother of X Factor judge Simon Cowell for a second time after fresh plans were unveiled to turn their former local into private flats.

Nicholas Cowell and his partner Adrian Levy have submitted a new application to convert The Squirrel pub, in the former Skiddaw Hotel in Chippenham Road, Maida Hill, into homes.

Westminster Council rejected similar proposals last year, warning the owners to do more to reopen the pub – a favourite of Clash legend Joe Strummer – which has been shut for two years since its former landlords went bust.

The Maida Hill Neighbourhood Forum, in its official objection, said: “A pub on this spot has been a place for neighbours to socialise in for nearly 150 years, including famous locals Joe Strummer and Irish playwright Brendan Behan.

“Until a few years ago it was one of nine pubs in our area. One by one they’ve been bought up and closed by developers like the owners of The Squirrel, The Cowell Group – who say on their website they’re particularly interested in properties that can ‘be reconfigured or have their use changed, thereby allowing us to add value’.

“Now The Squirrel is one of our last four pubs. There is a desperate need for pubs as places for neighbours to meet, or to sit in a friendly space if alone. Somewhere locals can mingle, and get to know each other, where there’s an outside space to relax. They are essential for social interaction and community cohesion.”

A Westminster councillor, whose name is redacted in the planning documents, added: “I cannot emphasise enough how valued this pub is by the local community.

“The truth of the matter is that there are several thriving local pubs and there is no reason why The Squirrel could not be amongst them as it once was. As a local councillor I have not received or heard representations in favour of the proposals.”

The Cowell Group’s application says the four-storey pub is not listed or in a conservation area.

A bid to designate the building as an “asset of community value” was rejected by the council, who said it had not been proved that the building “has in the recent past been used to further the social well-being or the social interests of the local community”.

Its leaseholder, Faucet Inn, went into administration in June 2018 and the pub has been boarded up since.

A similar application was turned down last August, with the council saying the proposals did not include enough family-sized homes and plans for redevelopment were “unsympathetic to the building and incongruous within the street scene”.

The Cowell Group’s proposal includes “one family-sized dwelling” and the new application said: “This is the first amendment of the proposed scheme … the re-design of which has taken into account the reasons for refusal of the first scheme.”

The developer is claiming that three years of marketing to find a new pub operator had not come back with “one single offer”. This was because of the “vacancy rate of the local shops being very high”. A viability report, from Davis Coffer Lyons, said running a pub in the building was “no longer a viable business”.

Mr Cowell and Mr Levy’s application said: “It has been demonstrated that the proposals will provide a wide range of planning benefits for the building and the surrounding area:

“The provision of new flats in a central London location to help meet the identified housing needs within the City of Westminster and London more generally.

“The scheme has considered and addressed the reasons for refusal of the previously submitted application. Finally, it has been proved that the scheme is planning policy compliant and consequently it should be granted permission.”